Shed No Tears: A Novel 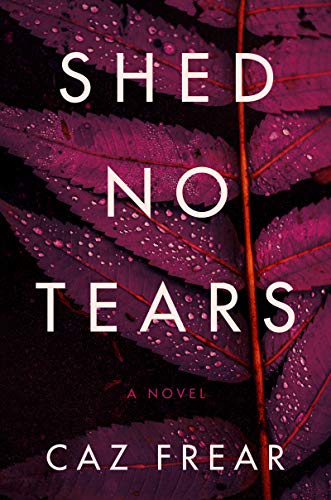 “Frear’s writing has the sharp dark tang that Tana French exhibits, and she updates the British crime narrative to the dangerous conflicts of loyalty that Stuart Neville paints best, with their hungry roots in the ever-decomposing past.”

The third British crime novel in the Cat Kinsella series, Shed No Tears, strikes two powerful storylines: one of a serial murderer, imprisoned, whose full set of crimes may not have been uncovered yet; and the other of Kinsella’s personal closet of secrets. Though she’s steadily making her way as a member of London’s Metropolitan Police (she’s now a Detective Constable), her dad was and is connected with major criminals, and she’s managed to keep this out of sight in her own career. Until now.

The pressure’s on. The body of Holly Kemp, long presumed to be a victim of a convicted killer, turns up in the wrong place, in the wrong condition, and with a manner of killing that just doesn’t fit. Sure, serial killers can change their modus operandi. But the alleged killer can’t make up his mind whether he did or did not commit this murder, and the more Kinsella and her partner Luigi Parnell probe, the more the case problems keep leading back to the original investigation. And investigators.

Nobody could fault Kinsella for being slow to put together the pieces here. Her own heroes in the police force have done some of the manipulation that’s hiding the trick. Plus her dad’s been in the hospital, her sister is way too nosy, and her boyfriend can’t understand why she won’t introduce him to her family. One reason is, he might realize the crime connection; the other is that Kinsella broke the rules by pursuing this guy when he was a crime victim, and her sister is all too likely to divulge a much worse complicating factor (yes, dear old dad again, in another form).

Frear’s writing is intense and suspenseful, with a perfect balance of red herrings and dogged pursuit of the truth. She spills Kinsella’s stresses a bit at a time, from a first-person point of view that always hides something:

“I’m going to be the best aunt in the world.

“Because I can live with the Bad Sister tag. I’ve been living my whole life with the Bad Daughter tag. But the Bad Aunt tag—when it’s occasionally flung—stings like a bitch.

“Although not as much as the Corrupt Officer tag.

“The most poisonous tag of all, known only to me.”

But in uncovering what motivated the witness, Kinsella puts her own careful stack of cards at risk, not just of physical danger but of baring all her secrets.

Frear’s writing has the sharp dark tang that Tana French exhibits, and she updates the British crime narrative to the dangerous conflicts of loyalty that Stuart Neville paints best, with their hungry roots in the ever-decomposing past. If there’s a single weak spot in Shed No Tears, it’s in the overly optimistic ending. Yet with Frear’s record to judge from, it’s a good bet that the sequel to come will turn out to be more menacing and dangerous than Kinsella could have guessed, even from her own family’s experience.