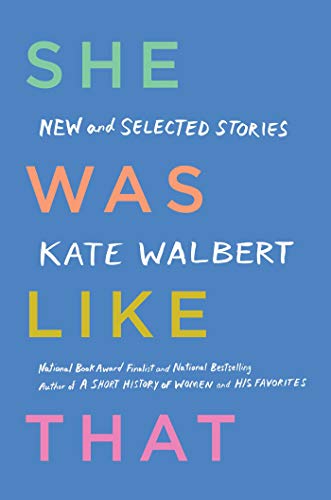 “Walbert’s prose is undeniably lovely, and her stories evoke vivid moments in time.”

Kate Walbert’s first book, Where She Went, published in 1998, was a book of linked short stories. In the two intervening decades, she has released five novels to significant acclaim. She Was Like That is her second short story collection. In spite of being only the second collection, She Was Like That is “New and Selected Stories”: it includes two stories from Where She Went as well as new material.

Some of the stories in She Was Like That are old, but the collection as a whole feels much older. Walbert’s stories focus on the lives of upper-middle-class white women in and around New York, who “question the definitions assigned to them as wives, mothers, and daughters.” “Question,” though, is too strong a verb. These women are uncomfortable, but not critical. The older women tremble with Betty Friedan-esque domestic ennui. The younger women bustle about with the stylish, slightly manic energy of the New York Times “Style” section: elegant, educated, moderately well-to-do, and forever nervous at their failure to be perfectly, glamorous urban mothers.

In “M&M World,” Ginny reflects on her own need for greater hipness as she treks with her two preteen daughters toward the titular Times Square tourist magnet: “She needs a new coat, an elegant one like those she’s seen on other mothers, something stylish to go with the other stylish clothes she means to buy, and the boots, the right boots. . . . She should take a class—philosophy, religion, vegan cooking—and wear sandals there, the new skin, with the straps that wrap around the angle and twist all the way to midcalf.”

There’s an urgency to Ginny’s desire to achieve peak feminine hipness, but it’s oddly generic. She, like so many of Walbert’s heroines, lives entirely within the bubble of aspirational elegance and failure. One waits for Ginny to consider the world with greater complexity, or to look beyond her urban gloss, but she’s distracted, caught in a moment of motherhood that runs on anxiety without end.

The anxiety is powerful, but its power has limited range. These are women with the problems of (relatively) rich white women, to the point that they’re almost a study in the self-involvement of white American womanhood. Even there, though, there’s no complex critique. Walbert’s characters are who they are, and the stories don’t encourage a larger view.

Within that social bubble, there are funny moments. In “Playdate,” two mothers of private school girls bond much more enthusiastically (and drunkenly) than their children. Here, there’s an almost-moment of insight into the sheer banality of their existence: “And what of Fran in the kitchen? Liz in the living room? Urban/suburban women circa 2007 participating in/on playdate, an urban/suburban ritual intended to alleviate boredom/loneliness among children/women while encouraging/controlling social engagement—” But the meditation is interrupted by the arrival of the first of many bottles of wine, and the trope of “wine mom” takes over.

Walbert’s prose is undeniably lovely, and her stories evoke vivid moments in time. The stories themselves are brief and unreflexive, offering glimpses of worlds but little commentary. Neither do the heroines reflect more than momentarily on the meanings of their experiences.

In “A Mother Is Someone Who Tells Jokes,” Helen mothers a teenaged autistic son and reflects on her own intellectual failures. In “Radical Feminists,” Beatrice, mother of two energetic sons, encounters a man she blames for derailing her career, though in fact much of the derailing may have been her own self-sabotage.

In that story and others, there’s an uncomfortable almost-anti-feminism at work. While women writing similar stories in the 1950s and ’60s suggested struggle and potential, Walbert’s heroines never seem to see beyond their bubble-worlds. Perhaps in longer stories, Walbert might reveal more depth and potential, but these brief tales, though beautifully composed, purport to explore women’s lives without much interest in gender, its politics, or the complexities of women beyond the social roles Walbert herself lays out.