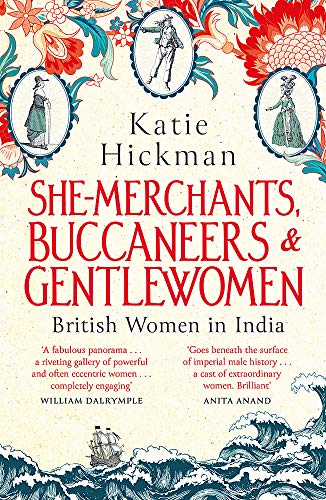 In this lively and capacious volume Katie Hickman sets out to show that English women in India were a much more diverse group than the popular image of the “Memsahib” would suggest, though unsurprisingly “gentlewomen” of various gradations of gentility predominate largely because they were the ones who diligently recorded their lives and were copious letter-writers.

There are very few she-merchants here, and as far as we can see no real “buccaneers” unless that definition is stretched as her press release suggests to “risk-takers and adventurers” such as the infamous but “high-class” London courtesan who travelled to India with her protector the diarist William Hickey, and arrived after the long voyage as “Mrs Hickey” to become the darling of Calcutta society.

On the other hand, Hickman does include some less exotic species such as teachers, nurses, and missionaries who were quite numerous toward the latter stages of the period she covers. The narrative does not take us far beyond Queen Victoria’s installation as Empress in 1876, explaining that “the arrogance and racism of the British” became intolerable after that point. This is an unfortunate choice on Hickman’s part. The story of the British woman in India could have been usefully continued until Independence in 1947.

The first British women to travel to India did so in the early 17th century, nearly 250 years before the establishment of the British Raj. As Hickman writes: “women made their way to India for exactly the same reasons that men did: to carve out a better life for themselves. They did so under the auspices of the East India Company, a British trading entity that began its life as a handful of tiny mosquito-infested trading posts along the Indian littoral” which  would “One day . . . swell to become the world’s most powerful, paramilitary corporation, de facto ruler of most of the sub-continent.” In fact, some more solid background information on the extraordinary phenomenon, which was the East India Company, could usefully have been included as backdrop to the lives of the women portrayed with varying degrees of detail.

Most women who travelled to India were wives, mistresses, or servants, but some of them, like Mrs Hudson who arrived in the Mughal port of Surat in 1617, brought with her the not inconsiderable sum of £100 (about £24,000 in today’s money) to invest in the indigo trade. She was rebuffed by an existing monopoly but allowed to trade in cloth instead.

Hickman deals rather cursorily with the “famous fishing fleet” with its cargo of single women, sponsored by the East India Company as it became better established to provide wives for the red-blooded empire-builders, to populate the continent and in the unspoken and vain hope of preventing them from contracting unsuitable alliances with the “natives.”

Although many of these women led extraordinary lives by any standards Hickman lacks the novelist’s skills to make them leap off the page as individuals. With few exceptions—Henrietta Clive, and Eliza Fay spring to mind —these women remain curiously flat. The reader is often lost in a welter of Harrietts, Floras, and Fannys, which tighter editing and attention to chronology could also  perhaps help to have clarified.

Where Hickman does come into her own is as a social historian with her extraordinary lists of the domestic details of British India. How many nightgowns and of which material would a woman need for travelling to the north-west Punjab? (Answer: Six, silk or wool). Along with tennis dresses (two) and tennis shoes (two pairs), a riding habit, etc.

Equally fascinating are the lists of servants thought necessary (57 in total for a junior army official and his wife in Allahabad) some of whom had servants of their own. And the profligate orders of British women, mostly of hats and shoes from “home,” which took months to arrive by ship.