Before She Disappeared: A Novel 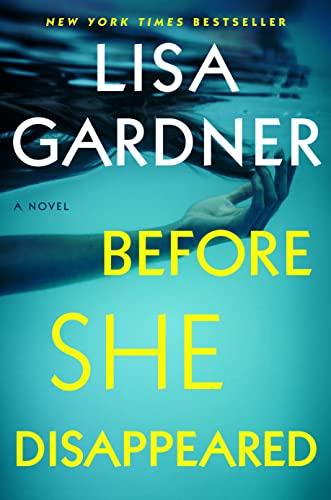 “Before She Disappeared introduces what may be the most powerful sleuth of the decade, an ‘ordinary’ woman driven to uncover the truth at any personal cost. There’s only one thing to ask for by the time the book ends: please, please, a sequel and a series.”

The new thriller from Lisa Gardner, Before She Disappeared, cuts remarkable new ground. An intense and fast-paced investigative novel—practically a police procedural—it features the compelling presence of Frankie Elkin. Sober more than nine years, Frankie’s on a hunt for the only thing that eases her personal cravings: finding the lost.

Her arrival in the Mattapan section of Boston comes hard. White and female, she might as well wear a target or a sign that says “hurt me” in the rough district. But she’s there to find Angelique, a vanished high school student. Whatever search there’d been for “Angel” ended months ago, as far as Frankie can tell. Drugs, prostitution, or just leaving town, those are the common assumptions made about a kid on the wrong side of life.

But not by Frankie. Looking straight at the situation, she sees no reason that a high-achieving Haitian immigrant determined to save her family from deportation would just vanish and not even reassure her mom or brother. And Frankie’s got a plan for investigating and trying to find Angelique, as she’s done with fourteen earlier missing persons. Only this time she hopes, as she hopes every time, to find the person alive.

Taking up a job as a bartender may sound risky for her sobriety, but although booze hasn’t lost its appeal, she’s committed to something more powerful, the surge of adrenaline from finding the lost. Her first task: persuade the local bar owner to give her the job, as well as the empty upstairs living quarters. In spite of her white skin.

“He shakes his head. With more glasses to dry, he crosses his arms over his chest and looks at me straight on. He still doesn’t say a word.

‘I work hard.’ I tick off a finger. ‘I’m on time, especially because I’m going to be living upstairs, and I won’t siphon your booze. I pour fast, I know how to change out a keg, and I’m an excellent listener. Everyone likes a good listener.’

‘Neither did you, but you’re coming around. Give me a month. By then no one will notice my white skin or superior gender. I’ll just be another fixture behind the bar.’”

Why here? Because this is where Angelique and her relatives belong. And in a very short time, Frankie figures out why the hunt for this teen started late, ended early, and isn’t going anywhere. Partnering with a police detective who’s frustrated at the lack of progress, Frankie earns her way past his reluctance to trust her, and proves that her ability to listen—especially to teens and women—can reopen the case.

When Frankie discovers proof that the teen is still alive, and seeking help, that partnership with the local detective becomes essential. But it stays charged with anger and territory, and the hunger Frankie carries with her: consuming, propulsive, and perhaps entirely destructive. That’s similar to what drives the “kids” around her, including another missing teen, revealed as “the missing girl no one even knew was missing,” yet who sets a criminal enterprise into focus and ramps up the danger to all involved.

Gardner’s fierce and skillful blending of rage and despair and unhealable wounds makes Frankie an unforgettable protagonist. She can’t be called an amateur sleuth, because her impassioned searches have shown solid results. She has families that speak for her, because she cared enough to work for discovery of what happened to their loved ones. Yet she’s not paid by any of those. And she walks a knife edge of internal haunting.

Before She Disappeared introduces what may be the most powerful sleuth of the decade, an “ordinary” woman driven to uncover the truth at any personal cost. There’s only one thing to ask for by the time the book ends: please, please, a sequel and a series.