She Come By It Natural: Dolly Parton and the Women Who Lived Her Songs 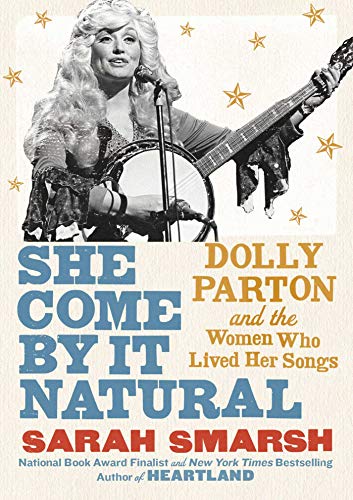 “A small, fun, and insightful book, She Come By It Natural can be enjoyed on its own or as a perfect companion to Smarsh’s Heartland.”

Sarah Smarsh’s warm tribute to Dolly Parton offers a revealing portrait of the buxom, hair-piled-high-on-the-head country singer whose songs of poverty and rural life have made her “a universally beloved icon” and a champion of women in poverty.

Born in 1946 in a Tennessee holler, the fourth of 12 siblings, Parton grew up dirt poor and was never ashamed of it. As readers of Smarsh’s previous book, Heartland, know, the author grew up on a struggling family farm in rural Kansas among hard-luck women who battled for survival. Small wonder that she would turn to Parton to further consider issues that have shaped poor women’s lives.

“In my family, country music was foremost a language among women,” she writes. “It’s how we talked to each other in a place where feelings weren’t discussed.” The music conveyed “messages about life, about men, about surviving.” In Parton’s music and life, in particular, Smarsh found what she wanted to say about “class, gender, and my female forebears: That country music by women was the formative feminist text of my life.”

First published as a magazine series, She Come By It Natural draws on Parton’s autobiography and other sources to describe the singer’s entire career, which was foreshadowed the day in 1964 when she told her graduating high-school classmates she planned to go to Nashville to become a star. (They all laughed.) Parton became a towering presence in country music as well as an enormously successful businessperson and investor. Now in her early 70s, she has appeared on the Forbes list of the 100 highest-paid entertainers in the world.

But she started out facing the power plays of a micro-managing older man, country entertainer Porter Wagoner, to whom she was contractually bound as his young female co-star on the syndicated Porter Wagoner TV show. Vastly underpaid, she left the show after seven years, at the age of 28.

Smarsh recounts Parton’s growing solo success, with country hits and Hollywood films (9 to 5, etc.) that earned her “sexist body-shaming” for her low-cut dresses. In one of many sharp observations, Smarsh notes the singer has long since turned body-shaming on its head. She has become “a smart business shark with a hyper-sexual presentation curated for her own power and delight.”

Indeed, Parton has broken ground “for female artists, for poor girls with dreams, for women who would like to be bosses without hiding their breasts,” writes the author.”

Smarsh discusses Parton’s hit songs (“Jolene,” etc.), her Dollywood theme park in Tennessee (three million visitors annually), her philanthropy through the Imagination Library literacy program, and even her Stampede dinner theater, which has been criticized as sanitizing the Civil War.

Throughout, the author stresses that this “sassy priestess in high heels” has given strength to her Grandma Betty and other women in poverty who go “unnoticed, undocumented, and ill-understood.” The singer’s homegrown feminism, she writes, demonstrates that “the most authentic female power does not always align with the politics of a movement.”

A small, fun, and insightful book, She Come By It Natural can be enjoyed on its own or as a perfect companion to Smarsh’s Heartland.