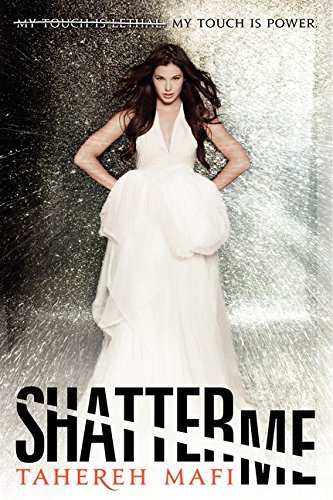 Shatter Me is Tahereh Mafi’s debut novel, the first book in a dystopian trilogy. While a crumbling world factors into the story in a big way, Shatter Me builds on that premise with paranormal elements. It is just such an addition—the combination of those elements—that adds depth and dimension to the story.

Shatter Me is the tale of 17-year-old Juliette. She’s been locked away in a prison of sorts, separated from society, shunned by family—she’s never had any friends—and all because she killed someone by accident. She was just trying to be helpful, but to do that she had to touch someone—and her touch is deadly. When you’ve been locked away in solitary confinement for months, not speaking a word, it’s a shock to get company, especially when it’s a stunning boy—but this boy, Adam, has secrets of his own.

Juliette finds herself an object of desire. It becomes a battle of wits between Adam, her savior, and Warner, her jailor. And they’re not the only ones that want Juliette. The Reestablishment, the new society, wants her as a weapon, as does the opposition. Juliette has been an outcast all her life. Life is about to change in ways she could never have imagined.

This novel sucks you in right away. It doesn’t waste a moment giving you dry backstory, but takes you right to the start of the action: Juliette locked away. The scenario begs for an explanation, but you don’t get that right away and that’s okay because the journey to find that answer is filled with such intricate worldbuilding, the reader remains fully engaged.

The device used to convey Juliette’s inner thoughts is unusual. It consists of strikeouts of the words. This was initially annoying and can pull the reader out of the story, but over time one gets used to it. It becomes a convenient way to grasp the true nature of her feelings and show the volatility of the same.

The author has a fresh grasp of language that was evidenced through her original turns of phrase. It is a pleasure to reread and ruminate over them.

Shatter Me is intriguing. Imbued with mystery, romance, high-stakes action, and paranormal adventure, Shatter Me captures the reader from page one. The conclusion was particularly well done, setting the stage for the next installment in this compelling trilogy.