Shatner Rules: Your Guide to Understanding the Shatnerverse and the World at Large 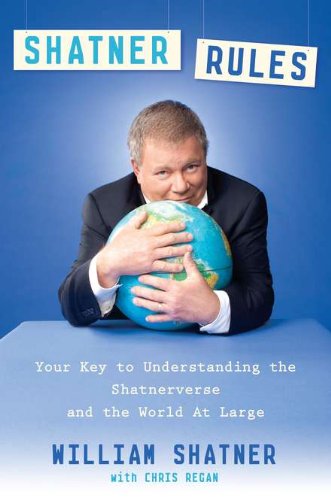 “And so it goes. In the end, Shatner’s Rules, like Shatner’s ego and Shatner’s vocal patterns, are uniquely his own. And having learned his life’s lessons well, William Shatner does not just want cake—he takes it as well.”

According to Shatner Rules: Your Guide to Understanding the Shatnerverse and the World at Large, William Shatner’s mother, by the time she had passed the eighth decade of her life, had developed a means by which she solved one of humanity’s greatest yearnings by quite literally having her cake and eating it too.

As author William Shatner puts it:

“I, William Shatner, am now eighty years of age, and I’ve been thinking a lot lately about my late mother’s eighty-fourth birthday.

“We were in a restaurant—me, my two sisters, our respective spouses, and Mother Shatner, who was beaming from ear to ear. Why was she a-beam? Well, a retinue of handsome waiters surrounded her, bellow-singing ‘Happy Birthday’ as only struggling young actors can. A small slice of cake sat in front of her, its sole candle missing its eighty-three siblings, waiting to be blown out by the happy old lady.

“And while Mother Shatner and the waiters smiled, her children and assorted family members scowled.

“Well, it was not my mother’s eighty-fourth birthday.

“That event had passed a few months previous. And once again, my family was mortified by my mother following what had become an important ‘rule’ in her life.

“The rule was: ‘When Dining Out, Always Tell the Waiter It’s Your Birthday. That Way You Always Get Free Cake.”

In order to appreciate and absorb the wisdom of such a “rule,” the reader must, of course, first absorb and come to terms with that sentence—the simple, declarative sentence that opens the text (by way of a quick snip and a period):

“I, William Shatner, am now eighty years of age.”

Impossible, thinks the reader, Captain Kirk is what, 34 or 35? And then he remembers that Shatner/Kirk was 34 or 35 back when “Star Trek” was first run, back when the reader was, what eight or nine?

And he was saying something about cake:

“And it comes down to this: Life is hard; get as much free cake as you possibly can. My mother deserved it, I deserve it, and you deserve it. And make a wish when you blow out the candle.”

Inspired by his mother’s simple rule, William Shatner, in the hopes of milking the concept into a book-length manuscript that could be the published as the latest in the long, long line of celebrity “books” and “memoirs,” has given his work a catchy subtitle: Your Guide to Understanding the Shatnerverse and the World at Large, complete with that word “Shatnerverse” that should be good enough to lure a few Trekkies (or their mothers, in search of a Christmas gift) into buying said book.

However, something funny happened along the callous and money-grubbing path toward publication, and that funny thing is the book itself.

With a sense of humor, a zest for life, and an oversized ego that have in no way been diminished by age, Mr. Shatner has, in his Shatner Rules, managed to corral a herd of wry comments and a few outright belly-laughs into a memoir that surprisingly also proves remarkably revealing of the man himself. Few Hollywood autobiographies published in recent years have yielded half as candid a portrait of their subject. The reader just has to pick among the jokes to dig up the kernels of truth.

First there are the “rules” themselves, all caged within simple homilies based in the actor’s life experiences. From deciding against all reasonable advice to allow himself to be roasted on Comedy Central, Mr. Shatner takes the rule: “Say ‘Yes’” and shares, as his reason for agreeing to appear along with those he refers to as “comedy inquisitors,” an old actors adage:

“Only stuntmen get hurt.”

He does this in a manner that suggests you are a guest at his party and he is standing in front of you, waving his hands in your direction to get your full attention, before launching into a story that’s been told many, many times before, always to good and lighthearted result.

You get the idea. This is a book written by a man who loves the sound of applause.

Each chapter presents a rule or two, a few of what are, in this book referred to as “Fun Factners” (example: One of Candice Bergen’s first films was The Sand Pebbles, which was also my nickname for my kidney stones) and an anecdote which, more often than not, references “Star Trek,” “Boston Legal” or horses. The format allows Mr. Shatner to laughingly settle some old scores (George Takei, David E. Kelley) or to share information about his life and loves (horses, grandchildren).

Along the way, the reader dodges any number of ricocheting quips, barbs, and memory shards:

About his iconic role: “‘Star Trek’ never really caught on with audiences, ran for three seasons, and was canceled. I wish I had taken notes at the time, because you people sure do have a lot of questions about it.”

About his health: “For many years, I suffered from tinnitus. Now, it only flares up when I don’t want to listen to all those questions about ‘Star Trek.’”

About horses: “Seeing one of these animals in action is not unlike watching a ballerina at work.”

About his recording career: “I tried to explain . . . what I was attempting to do with The Transformed Man, which was link great literature of the past with great modern literature—the poetry found in many songs of the sixties.” (The result was, in part, a classically bad version of “Lucy in the Sky with Diamonds.”)

About Facebook: “I had had my Facebook profile for a few years. I’d been taking quizzes, tending my Farmville animals, poking and getting poked, and in March of 2011, the overlords inside the fortress of Facebook mountain decide that I was a fake William Shatner and deleted me.”

And about himself: “Depending on the location, when you meet me, you probably won’t meet Shatner. I will probably be in Bob mode. Bill’s a very nice guy. He likes horses, and his kids and grandkids. Bill adores his wife. Bill turns the lights off at night and makes sure the bills get paid, and he memorizes his lines during his spare time so he doesn’t get fired from his current job. That’s who Bill is.”

And during the parts of the book in which things get written in “Bill mode,” the results are surprisingly candid. Like the part about his previous’ wife’s sudden and early death from drowning and the brief time he spent as a potential murder suspect.

And the part where he speaks to his personal dread of mortality and his fear for the mortality of planet Earth. (“I often felt like my character in the classic ‘Twilight Zone’ episode ‘Nightmare at 20,000 feet.’ I was shouting about impending disaster, but no one was listening.”)

And this sweet part, about his moment of clarity, experienced in the Himalayas, while he was staying at an ancient Buddhist temple, sometime during the 1980s:

“The enlightenment was this: that there exists nowhere on Earth a ‘soulful place,’ but that all, everywhere you are, is the soulful place. I could achieve what the Buddhist monks were trying to achieve in the valley at the confluence of Mount Everest and all those other holy mountains—wherever I was.

“This entire world is filled with mystical qualities, including my little slice of the world, with its horses and dogs and loved ones and that paradise and enlightenment are always within my reach.”

Of course, here, at this point, Mr. Shatner intrudes, to comment:

“Although, honestly, I wish that wave of perception had come to me on the first night in Tibet. I would have hotfooted it to the nearest resort as soon as possible. Enlightenment can arrive in a hot tub, too.”

And so it goes. In the end, Shatner’s Rules, like Shatner’s ego and Shatner’s vocal patterns, are uniquely his own. And having learned his life’s lessons well, William Shatner does not just want cake—he takes it as well.