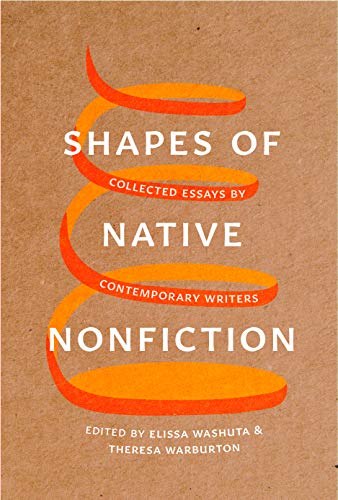 “For the writers of this anthology, personal essays are political acts. . . . it’s an accessible, engaging book . . .”

Native writers (where “Native” is a shorthand for “Native American” or “Indian” or “Aboriginal” or “Indigeous”: the native peoples of Turtle Island, which is the continent that settlers call “North America”) are a varied group. Native peoples are varied. Forty-six years after the Wounded Knee Incident, Native resurgence is a powerful, multi-generational force.

Shapes of Native Nonfiction explores many of the complexities of Native writing and Native life. Native writing has gone far beyond asserting existence (in opposition to the “Vanishing Indian” myth) or recording heritage. The contributors to this anthology are working authors with a wide range of perspectives and experience. Some were raised in traditional communities. Some grew up in urban areas. Some were “adopted out” as part of an identity-erasing campaign that placed (and still places) Native children with white families.

In this sense, “Native” is anti-monolithic. It isn’t one identity. But that doesn’t mean that the desire for unity isn’t there. Eden Robinson’s magnificent short essay, “Real Romantic,” articulates an ongoing search for connections. She writes of her family, her clan, her nations, and the dates she’s been on, looking for connection, but not too much. (A promising date turns out to be a first cousin. Rats.)

In the spirit of love, she reaches out directly to Native readers searching for their own connections: “And for those of you reading this who were taken out of your communities, who were adopted out, and now find yourself on the outside, we know this awkward dance between longing for connection and being afraid of disappointment or rejection. All the news you hear, all the stories about how broken we are, how damaged—it’s true and it’s not. Yes, we have our troubles. But when you come home, you’ll find us unafraid of your complexity.”

That lovely, deeply personal paragraph could serve as an introduction to the book. (The book’s actual introduction is a scholarly essay, fine in its way, but radically removed in tone and practice from the works that follow.) In spite of differences, histories of trauma, and separation, there’s a community, and it’s in constant dialogue.

Shapes of Native Nonfiction brings together work from many of Turtle Island’s most prominent “young” writers (Robinson admits in her essay to being 49, but who’s counting?). This isn’t the first time, though. These are writers who have worked together before. They are anthologized together. They’ve been to parties together. They write back and forth to one another.

“The Personal Is Political” is an old-fashioned slogan, now, but at its root it’s still true: power struggles play out at the level of the body. For the writers of this anthology, personal essays are political acts. Though Shapes of Native Nonfiction is far from a primer on any of the issues it addresses, it’s an accessible, engaging book, both for those who have read widely on the subject and for those seeking a place to begin.