Shall We Dance? (The Dance with Me Series) 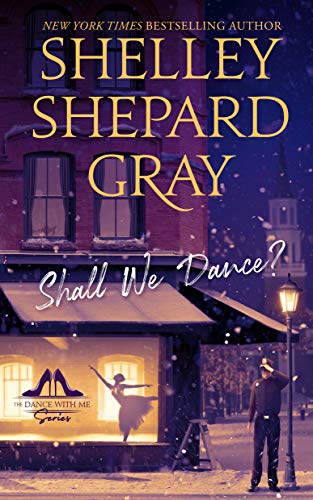 Twenty-seven-year-old Shannon Murphy is excited to learn she has sisters. After her mother's death 24 years before she left three daughters and a ton of bills, and the girls were separated and adopted or fostered out and never knew about their siblings. When Shannon takes a DNA test, she discovers the couple who raised her aren't her biological parents, and she also has two sisters.

Shannon contacts them, and they all decide to live together for a year to get to know each other and see how well they can bond. Shannon leaves her West Virginia birthplace to rent a dance studio with an upstairs apartment in Bridgeport, Ohio. With shattered dreams of becoming a professional dancer, Shannon now fulfills her passion by teaching.

Sister Traci, a Cincinnati cop, is happy to be away from the pressures of the big city to gain employment at the small-town police department. Kimber, the other sibling, a gorgeous fashion model living in New York City, is ready for a change. Shannon worries if the relationship will work with her more successful sisters knowing she's “just a hick” as she calls herself, but she is overjoyed she's not an only child. With a wobbly start, the three have an easy rapport as they learn about each other's past and share stories.

Shannon's first private client is a man named Dylan Lange. She finds him very attractive, yet aloof, and she is dismayed when she hears he is only taking lessons on a bet. This is her livelihood, and she expects enthusiasm from her participants. Still, there is something intriguing about him that she cannot deny.

Dylan, an officer in town gets Traci, Shannon's sister as his new partner. In addition to connecting with her, his mind mostly remains on his younger sister, Jennifer, who two years prior was the victim of a brutal assault and rape. Overprotective of her from guilt of not being able to protect her, she lives with him while she works hard to recover.

Through many therapy sessions, Jennifer understands she must regain her life if it means leaving the house. An avid cook and a lover of cookbooks, she forces herself to go to Backdoor Books, a charming store in the next town. She musters up the courage to enter the shop only to literally bump into a young man with a boisterous puppy. Their collision makes him spill coffee on her causing her an emotional meltdown.

Afterward she relays the situation to Dylan, and he says:

"'You had a flashback,' he finished for her. He'd gone through quite a few of those with her first four or five months after her attack. Little noises or movements would set her off.

"She nodded. 'Yeah. He was too close. I thought he was going to touch me. Or, at least it seemed like he was. I freaked out and ran out the door.'

"I know. I had all these grand plans, but all that happened was I got burned by hot coffee and made a fool of myself in public.'"

Though Dylan's primary job is caring for and keeping Jennifer safe, he finds he enjoys his dance lessons and especially the attractive teacher, but he will not start anything until Jennifer is recovered.

Not long after Jennifer's bookstore episode, the sisters offer to take her back to the store. They also want to check out the "hunk" Jennifer met there who is the owner's son, Jack Patterson. He is there and offers to take Jennifer to lunch to make up for the coffee mishap. Determined to get her life back on track, she gratefully accepts, and the girls believe she can handle it. They stop at Jack's house on the way to let the puppy in, but the pooch runs away into the woods. Jennifer unable to just sit in Jack's truck heads out to search for the dog only to lose her way. Not only is it cold, but it is also snowing. Desperation sets in as she wonders if she'll ever be found, or if she'll freeze to death.

Meanwhile, Dylan is furious with the girls for letting his sister go with a stranger, and he takes his anger out of Shannon, destroying any closeness they may have started. Shannon, understandably upset discusses things with Traci and Kimber about her thoughts on relationships:

"'Y'all, this year—discovering I had sisters, starting my business, moving . . . all of it—well, I've given a lot up and made a lot of changes. It's been hard.' She looked at both of her sisters. 'At least it has been for me.'

"'You aren't lying, it's been real hard.' Kimber agreed.

"'That's what makes me think I don't need to get into a relationship like that.'

"'I know.' But did she want to fall in love with a man who could blame her so easily? And had she really just thought about loving Dylan Lange."

"Oh, for Pete's sake. Did she even know what love was?

"After sharing a look with Kimber, Traci raised her glass. 'Cheers to that.'

"As their drinks clinked, Shannon realized right then and there that she actually did know what love was.

"Love was when her sisters didn't point out that she was lying through her teeth."

Shelley Shepard Gray, well-known for her inspirational Amish novels, presents book #1 of her Dance with Me series. The writing is fluid and easy to read, which makes this a pleasing tale that is not saccharine sweet. It combines true emotional viewpoints and horrific experiences, a touch of mystery, and the understanding of how strangers can come together to provide love and support.