Shaking the Gates of Hell: A Search for Family and Truth in the Wake of the Civil Rights Revolution 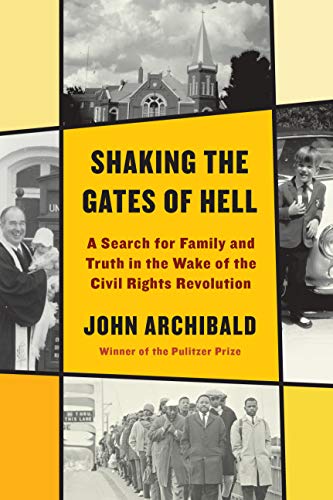 “An affecting blend of memoir and history, Shaking the Gates of Hell offers an unflinching account of a family in a tumultuous time.”

Pulitzer Prize-winning Birmingham News columnist Archibald was seven days old when the civil rights movement exploded in his native Birmingham, Alabama. That was in April 1963. “I was born in the midst of revolution,” he writes. “And I didn’t even know.”

In Shaking the Gates of Hell, Archibald comes to terms with those days, when white ministers of the city, including his own beloved father, remained silent while Black demonstrators were hosed with water and attacked by dogs as they protested against racial segregation.

That “conspiracy of silence” shaped Archibald’s early years. It was not until the 1980s that he learned about the events of the period, including the deaths of four young Black girls in a church bombing, and read Martin Luther King Jr.’s now-classic “Letter from a Birmingham Jail,” in which the civil rights leader chastised white clergymen who had called for law and order, “common sense,” and an end to disruptive demonstrations.

For the author, son of Methodist minister Robert L. Archibald Jr. (1929–2013), and a descendant of many other ministers reaching back to the 1740s, the call for calm and the status quo by Birmingham ministers was simply “cowardice masquerading as reason. Silence in the guise of God.” He was—and remains—haunted by that silence, “the willful ignorance of the white South,” and by King’s powerful letter.

A question reverberates throughout this moving memoir: “Why have a pulpit if you will not use your voice in all the ways you can?”

Examining a trove of sermons written by his father, the author finds “no words about race and justice and other sins that suffocated the South.” There were parables and sidelong glances at the moral lapses of men. But no “truths that dare not be spoken in the oppressive censorship of the mid-century South.”

The effect of this realization was compounded by Archibald’s adoration of his father, a loving, “responsible” man, a lifelong Boy Scout at heart, who introduced the author to nature and fly fishing.

A retired college professor told Archibald, “Your dad was aware of how much he could lose” if he condemned segregation. He could lose church members, even his church post.

King’s Birmingham letter, in particular, haunted him. “It was a message to cautious and careful white people . . . to whom King addressed the letter. Like the members of my family, who thought they understood. It was to people just like mine, who tried to live like Jesus but turned the other cheek on to look away.”

King had written, “I have almost reached the regrettable conclusion that the Negro’s great stumbling block in his stride toward freedom is not the White Citizen’s Counciler or the Ku Klux Klanner, but the white moderate, who is more devoted to ‘order’ than to justice.”

By recalling 1963, “the greatest and most horrible year, the epicenter of all I know and love and loathe,” the author brings readers back into horrifying moments broadcast world-wide of Black children and teenagers being sprayed with fire hoses. His reflections leave the author with a recognition of the weaknesses of men and a new understanding of his complex feelings toward his father.

“It is a disappointment so deep it must be love,” he writes.

An affecting blend of memoir and history, Shaking the Gates of Hell offers an unflinching account of a family in a tumultuous time.