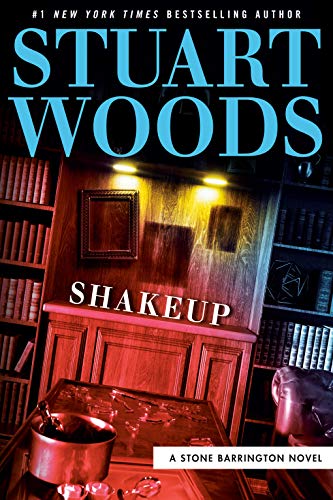 “Woods provides a lively romp of a book, but it’s built for entertainment, not solving puzzles. Pick up a copy to update your sense of why James Bond was and is adored.”

The newest Stone Barrington mystery from Stuart Woods, Shakeup, offers a lively fantasy world of being rich, attractive, and surrounded by great friends and wonderful lovers. Add a touch of crime and investigation, and you have a perfect luxurious visit to a New York City version of Bond, James Bond.

Spoiler alert in terms of earlier books in the series: Stone’s longtime and delightful lover Holly Barker has indeed reached the US Presidency, so Shakeup opens with the Inauguration. Of course, Stone’s not obvious about his relationship with Holly in public, but he’s there for the big event, witnessing (in his world) the second woman to step into the top US leadership role. It’s all good, including the warmth between Stone and Holly, and the civilized game plan of neither person being sexually exclusive when the other one’s not in town.

The tough part begins when Stone returns to his hotel suite and finds a newly dead woman on the floor in front of him.

Good thing Dino Bacchetti is both Stone’s suitemate and able to directly call in the chief of the DC police, Deborah Myers. Dino is also Stone’s former partner from their New York Police Department days. That means he’s one of the few that Stone can entirely trust, as the victim’s identity and the several individuals with motive to frame Stone become clear.

Meanwhile, Stone’s adjustment to his own new situation involves finding federal agents at his own home.

‘Hello, Agent Jeffs,’ Stone said. Jeffs holstered his weapon and shook Stone’s hand. ‘I’m alone, so you can stand down.’

‘I’m afraid not, sir. Washington has listed your residence and the Carlyle Hotel as places frequently visited by the president, so we’ll have one person on duty here at all times.’

. . . It was damned inconvenient, Stone thought.”

Rearranging almost everything at this point, including how he and Dino go out to dinner and where, keeps Stone hopping. So do the women in his life; his staff is adept at quickly rearranging his place, all fresh and welcoming, for the next one arriving. It’s all a sweet life of affection and pleasure—or, as Stuart Woods describes one of the new president’s arrivals where Stone is staying, “They enjoyed a long kiss, then more of each other.”

Interrupted, of course, by gunshots and another death or two, scattered around.

Things quickly heat up, and only Stone and Dino are really on top of all the possible suspects and motives involved, until the president sends her own powerful help to pitch in.

Don’t count on solving the crime before Stone; Woods provides a lively romp of a book, but it’s built for entertainment, not solving puzzles. Pick up a copy to update your sense of why James Bond was and is adored, and have fun imagining how the other half might investigate and celebrate.