Shakespeare and the Resistance: The Earl of Southampton, the Essex Rebellion, and the Poems that Challenged Tudor Tyranny 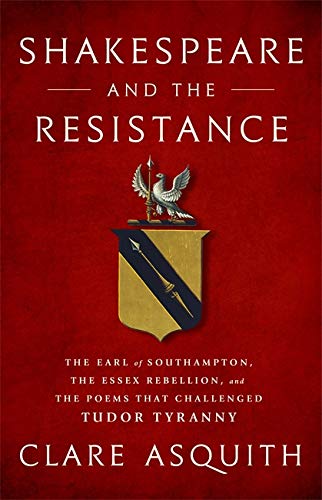 “Persuasive and meticulously researched, Shakespeare and the Resistance is a must read for anyone interested in the study and interpretation of Shakespearian era politics or literary criticism.”

As the year 1600 approached, discontent was stirring in Post-Reformation England. These were bleak years for Queen Elizabeth, whose 45-year reign was quickly coming to end. She had made no clear plans for succession and her royal coffers were nearly empty. People were beginning to question her ability to rule and behind closed doors secretly discussed the possibility of replacing the monarchy with republicanism. Amid these mounting pressures, William Shakespeare published two narrative poems dedicated to the Earl of Southhampton which contained explosive commentary on the political storms shaking his country.

These two poems were widely read in the time of their publication but today are seldom studied. Venus and Adonis (1593) tells the story of Venus, the goddess of love and her attempted seduction of Adonis, a very handsome young man, who would rather go hunting. The poem is pastoral, and at times sensual, witty, and heartbreaking. It contains dialogues on the nature of love and vividly described observations of nature.

The Rape of Lucrece (1594) is set in Roman times and begins one evening, at the town of Ardea, where a battle is being fought, two soldiers, Tarquin and Collatine, are talking. Collatine describes his wife, Lucrece, in radiant terms—she is beautiful and chaste. The following morning, Tarquin travels to Collatine's home where he is welcomed and he entertains her with stories of her husband's heroic deeds on the battlefield. He spends the night and is overwhelmed with lust for Lucrece. His desire overcomes him, and he goes to Lucrece's chamber, where he tells her that she must give in to his advances or be killed. He promises to keep it all secret. Lucrece pleads with him to no avail. He rapes her.

Lucrece is devastated and writes to her husband, asking him to come home. When he arrives, she tells him what has happened and racked with guilt kills herself. Collatine's grief is immense, and he wants to kill Tarquin but is convinced by friends that revenge would be a better choice. Lucrece's body is carried through the streets of Rome and the citizens take vengeance upon Tarquin by banishing him and his family from the city.

To lay scholars these poems are quite innocuous, but in her revealing new book, Shakespeare and the Resistance, Clare Asquith blows the lid off of the hidden meanings and messages of these works. Implications that would have been obvious in Shakespeare’s own time but have been overlooked in the modern era. Clare Asquith, the Countess of Oxford is a Shakespearean scholar and lecturer. In 2005, she authored Shadowplay: The Hidden Beliefs and Coded Politics of William Shakespeare.

“The practice of detecting covert contemporary references and hidden political allusions in the works of Shakespeare has a long and derided history . . . The unenviable task of Shakespearian scholars is to preserve the integrity of the text . . .”

Just as Lucrece had been defiled in The Rape of Lucrece, England had been desecrated by a tempestuous and oppressive monarchial dynasty. Beginning with the policies of Henry VIII and continued with his successors there was a systematic confiscation and pillaging of church property and other assets, as well as an appropriation of capital from the general public. Because of this actions, nobles and regular citizens alike began to question royal authority. But at the core of this societal insurgency, Venus and Adonis and The Rape of Lucrece gave England's marginalized populace preciously what it needed: a historically accurate reason to take direct action against the monarchy.

Captivating and well written, Asquith places Shakespeare at the heart of the political resistance that eventually led to the disastrously unsuccessful Essex Rebellion of 1601. Overall, she does an incredible job of reinterpreting two of William Shakespeare’s more neglected but politically explosive works. Persuasive and meticulously researched, Shakespeare and the Resistance is a must read for anyone interested in the study and interpretation of Shakespearian era politics or literary criticism.