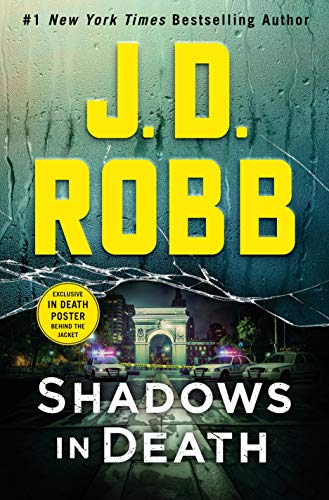 Each volume in this long-running series is titled [Something] in Death, with that something representing the volume’s theme. In this case, shadows.

And each volume is a murder—or multiple murder—case for NYC homicide cop Lieutenant Eve Dallas. Although the series is set in the nearish future (2061 in this volume), in most ways the environment is recognizable as an extrapolation of today’s New York City.

The volumes cycle between plot arc options for a police procedural. In Shadows in Death, Eve and company know right off whodunit, and their challenge is to nab the killer. Thus, it is a manhunt story rather than a mystery.

Owing to the shadow factor, this hunt is easier said than done. The killer is a shadow from Eve’s husband’s past. Roarke, now a gazillionaire and above-board ally of Eve in her lawful pursuits, began life as a pickpocket in Dublin. He was managed by an abusive father who also, theoretically, sired Roarke’s antithesis, Lorcan.

Roarke and Lorcan present a good example of nature versus nurture. Although coming from the same mean streets and (theoretical) bloodline, Roark had it in him to rise above, whereas Lorcan could never give up his grievances, and chose to walk the dark side. He became a hired assassin of exceptional skill who has eluded international police for over 400 kills.

He’s responsible for the victim in the case Eve is called to. Roarke happens to be with her because they’re off duty enjoying an evening out when the call comes. Thus Roarke, on the outskirts of the first stage of the official response and investigation, espies Lorcan on the farther fringes. Lorcan shows himself fleetingly to Roarke then disappears as a taunting power play and warning.

The rest of the story is how Lorcan ties into the hit and eludes capture while making it very clear he’s planning to go for Roarke and all his loved ones—including Eve.

But this shadow from Roarke’s past, and his shadowy movements, inspires Eve and her team to stellar police work. All their years of experience together (across 50+ volumes) combine into a unified force. The chase after Lorcan, while always dangerous and full of surprises, boils down to who has the greatest control, resources, skill, will, and brains.

While there are directions Shadows in Death could go to make it more physically exciting, they would also turn this story implausible. It’s a psychological adventure, a cat-and-mouse pursuit driven by motive and supported by the procedural aspect of the series.

That said, it’s still a harsh tale of good versus evil, and human versus human. There are shadows of political incorrectness on the justice side that might earn the author some flak in today’s volatile times. It will be interesting to see if anyone in her audience reacts in this regard.

For those not so inclined, the chase, capture, and resolution are intellectually and emotionally satisfying. Also consistent with the characters and morals of this outstanding series.

Given the series’ length, readers who have stuck with it have probably divided into camps by now, which will flavor their reactions to Shadows in Death. Those who want each book to be the same as the last may be disappointed; those who enjoy character growth and plot/situation change will remain enthused. And those who enter the series here will form an all-new viewpoint because they are unburdened by several dozen books worth of backstory.

Shadows in Death’s backstory focuses on Roarke to generate the plot, so most of the regular troupe are bit players this time around. Given the series’ history, though, it’s a good bet that the next volume will have a different focus and tone.

So if you love Eve Dallas, Roarke, and all their friends and colleagues, this latest in their capers will be a delight. If you don’t know them yet, try them out for size. There are lots of cases to catch up with if the book works for you—plus at least one new volume to look forward to every year!