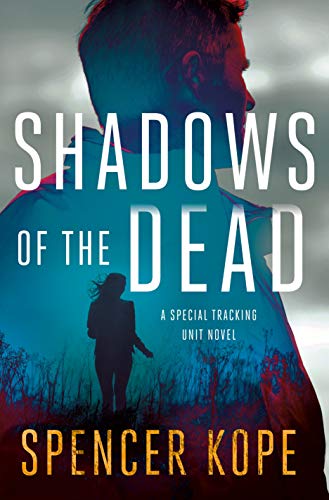 “Shadows of the Dead is not for everyone.”

An abducted woman is found alive in the trunk of a car after a high-speed chase. When the suspect flees on foot, his subsequent capture by local authorities and the Special Tracking Unit of the FBI seems to confirm what the victim has told them—the man who kidnapped her is not the one who left her in the car, and she’s actually the eighth victim in this unhinged and twisted series of sexual homicides.

Magnus “Steps” Craig must use his special ability to follow trails over any surface, tracking a residual aura he refers to as “shine,” to trace the activities of each victim and the paths taken by the killer as he stalked and kidnapped them. But when another victim suddenly disappears, it seems that Steps and his partner, FBI Special Agent Jimmy Donovan, might run out of time before this sexual predator claims another victim.

Kope writes directly from his personal experiences as a crime analyst in the Whatcom County (WA) Sheriff’s Office. He developed a database-driven analytical process called Forensic Vehicle Analysis (FVA) that is currently used to identify vehicles from less-than-perfect surveillance photos. In the novel, the FVA makes several appearances with its fictional creator, Dexter Allen, apparently functioning as a stand-in for the author himself.

Kope’s strength in this novel, and the others in the series to date, lies in his ability to tell a decent story that moves at a respectable pace. While fiction about serial killers is inevitably structured around the progression from victim to victim as the investigators inch forward toward the identification and capture of the suspect, Kope keeps his plotting fairly simple and linear enough that the pages turn without too much effort.

His weakness, however, is found in his characters.

As a first-person protagonist, Steps is maddeningly inconsistent. His super-power, the ability to see the “shine” left behind by anyone touching or walking across any surface, is cool enough to capture our attention up front. It’s interesting enough that we take his word for it that while each shine is unique to each person, like brilliantly colored fingerprints, Steps is able to separate specific shines from a jumble of others in high-traffic public places. It works nicely as a device to keep the story moving forward.

However, it’s Steps’ personality, separate from the shine thing, that we tend to gag on from time to time, as he vacillates throughout the novel between a diffident “special person” and an irritating curmudgeon.

He’s wildly lacking in self-confidence on the one hand, deferential to his partner and racked with phobias connected to forests and other unexpected things. Which is fine, as far as it goes: with every super-power must come corresponding vulnerabilities.

On the other hand, he’s also a card-carrying member of the law enforcement good-old-boys’ club with a knack for insensitive remarks and a yearning to fit in with the “real” FBI guys.

When he and his partner begin to discuss the profile of the victims, who (unsurprisingly) tend toward prostitutes and addicts, he blurts: “‘Yeah, half are mentals or druggies.’” When his partner reacts, he rolls his eyes, “like speaking the truth suddenly became uncouth.”

A few chapters later, when they take up their victimology exercise again, Steps and Jimmy engage in a faux-sensitive discussion of the issues as they relate to addiction.

Jimmy offers this pithy remark: “‘Imagine what the world would be like if one day everyone woke up and took charge of their own destiny, if they took responsibility for their lives and their mistakes and set on a different course.’” To which our fearless protagonist responds: “‘Wishful thinking . . . Too many are willing to accept their circumstances . . . they won’t give up their crutches, whether that’s heroin, alcohol, or the zombified stupor of mindless entertainment.’”

Kope apparently believes that addiction is a choice that people make, pure and simple. They merely need to choose not to be an addict, and recovery will magically happen.

The bottom line here is that readers might be better served to look for insight on this terrible, pervasive problem from a different source, and Kope would be much more effective as a novelist if he skipped the sociology lessons and wrote about stuff that’s more at his depth as an employee of the Sheriff’s Office, with plenty of law enforcement-related material around him to adapt into his fiction.

Shadows of the Dead is not for everyone. It’s a decent serial-killer novel in a series with an interesting and “shiny” twist, but the main character needs plenty of work before he’s palatable enough not to spoil the overall texture of the novel.