In the Shadows of the American Century: The Rise and Decline of US Global Power (Dispatch Books) 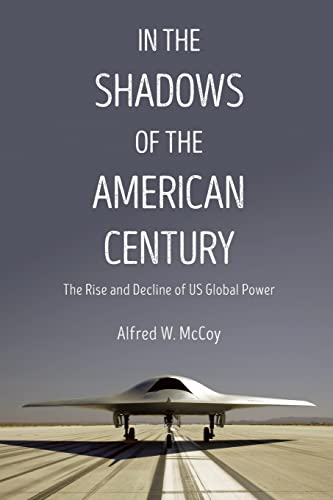 “a brilliant and deeply informed must-read for anyone seriously interested in geopolitics, the history of Empire, and the shape of the future.”

This is a remarkable and dazzlingly original account of the rise and potential near-term fall of the American Empire. A veteran and distinguished American foreign policy historian, Alfred McCoy opens by tracing the United States’ emergence as a world power during the Spanish-American War and the successor to England as the world’s pre-eminent power during World War II and the Cold War.

After seven decades as a global hegemon, McCoy argues, “Washington now faces multiple challenges that might well bring an untimely and early end to the American Century.” The game could well be over by 2030, the author concludes from his deep dive into “a military and economic battle for global domination fought in the shadows, largely unknown to those outside the highest rungs of power.”

By McCoy’s analysis, eight developments have been working to unravel core interrelated threads of U.S. global power since the end of the Cold War and the September 11, 2001 jetliner attacks:

1. Washington’s reduced ability to control local and subordinate elites atop other nations as “globalization [has] fostered a multipolar system of rising powers in Beijing, New Delhi, Moscow, Ankara, and Brasilia” and “a denationalized system of corporate power reduced the dependency of developing economies on any single state.”

2. The “covert netherworld” of clandestine intelligence and criminal drug trafficking has increasingly turned from being a U.S.-imperial/CIA asset into an obstacle to U.S. power.

3. The rise of an unprecedented global surveillance state overseen by the National Security Agency has cost the U.S. the trust of many of even its stop allies while badly undermining civil liberties and democracy at home as well as abroad.

4. The widespread and notorious use of physical and psychological torture in the U.S. global war on/of terror has both reflected and advanced the deteriorating moral legitimacy of the American Empire around the world.

5. Washington’s increasing terrifying reliance on a vast armada of omnipresent drones and on the cybernetic weaponization of space to police and discipline the global periphery has produced significant global backlash and tends to undermine the effectiveness of U.S. military forces on the ground.

6.  The steady and accelerating rise of China as the first nation with the capacity to meaningfully challenge and ultimately supplant the United States as the most powerful economic, political, cultural, technological, and military force on the planet.

7.  The eclipse of Barack Obama, who McCoy considers a “grandmaster of the great game” of multilateral global Empire, by the blundering and offensive nationalist and unilateralist Donald Trump.

8. The U.S. invasion of Iraq. Obama’s predecessor also comes in for blame.  “Future historians,” McCoy writes, “will likely identity George W. Bush’s rash invasion of Iraq [in 2003] as the start of America’s downfall.”

By McCoy’s account, Washington is engaged in an ultimately futile effort “to extend its global hegemony by substituting its military power for its eroding economic strength.” The U.S. will be eclipsed soon (historically speaking) by China, which is rapidly upgrading its intelligence, cyberwar, space weapon, missile, and air and naval powers to match its dramatically rising Eurasia-based economic power.  Beijing is positioned to take great advantage of the trade vacuum left by Obama’s failure to get Congress to sign the U.S. on to the Trans-Pacific Partnership and the Trans-Atlantic Trade and Investment Partnership.

McCoy concludes with a fascinating description of “Five [future] Scenarios for the End of the American Century.” The likelihood of the U.S. avoiding dramatic and rapid imperial decline (empires generally fall quickly, McCoy notes) is low, McCoy thinks, since, “the American people, blinded by decades of historically unparalleled power, cannot or will not take the steps to slow the erosion of their global position” (emphasis added).  Further:

“If the country is in fact on a twenty-seven year descent from 2003 to 2030, then Washington has already frittered away more than half that time with wars that distracted Americans from long term problems and, like water tossed onto dessert sands, wasted trillions of much needed dollars…If only thirteen years are left, then the odds of wasting this remaining time seem high.  In the aftermath of the 2016 presidential election, the country’s leadership is likely to be inward looking for four or eight years, unaware of how its unconventional approach to foreign policy would damage or even dismantle the delicately balanced array of strategic forces that have sustained U.S. hegemony for over seventy years. ‘This is probably what it felt like to be a British foreign service officer after World War II when you realize that, not, the sun does actually set on your empire,’ a mid-level State Department officer remarked in the muddled first months of the Trump administration. ‘America is over.  And being part of that, when it’s happening for no reason, is traumatic.”

Another and more serious deletion in McCoy’s book is any discussion of how and why the decline of the American Empire might be a good thing for ordinary people at home as well as abroad. As Noam Chomsky noted in the late 1960s, “The costs of empire are in general distributed over the society as a whole, while its profits revert to a few within.” The so-called “defense” industry, the highly profitable and powerful corporate wing of the “military-industrial complex” that Dwight Eisenhower left the White House warning Americans about is essentially missing in McCoy’s volume. (Also absent are Chomsky and the late Gabriel Kolko, arguably the two leading left U.S. critics of the Pax Americana since the 1960s).

And surely, McCoy knows that the Pentagon System functions as a great form of domestic corporate welfare for high-tech “defense” (empire) firms like Lockheed Martin, Boeing, and Raytheon—this while it steals trillions of dollars that might otherwise in meeting social and environmental needs at home and abroad. It is a significant mode of upward wealth distribution within “the homeland.”

The biggest costs have fallen on the many millions killed and maimed by the U.S. military and allied and proxy forces in the last seven decades and before. Oddly enough, the criminal and immoral nature of that ongoing slaughter never seems to get the recognition and denunciation it deserves in In the Shadows of the American Century. McCoy’s book ends with strange and misguided praise to “the American almost-century since 1945” for supposedly advancing “the rule of law, the advance of human rights, the spread of democracy” and “relative peace.”

These criticisms aside, McCoy’s book is a brilliant and deeply informed must-read for anyone seriously interested in geopolitics, the history of Empire, and the shape of the future.