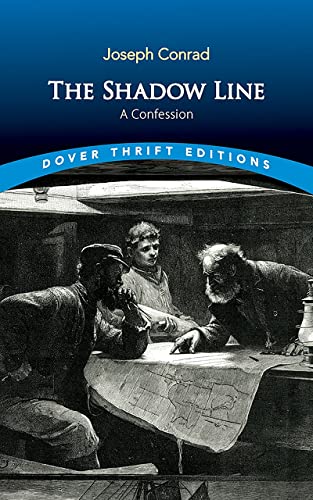 Joseph Conrad lived from 1857–1924. Both during his lifetime and for the near-century since his death, he has been celebrated as a present past master of English prose. This is all the more remarkable since English was his third language. Born in Poland, Jósef Teodor Konrad Korzeniowski was, when young, exiled to France; he settled in England in middle age—retaining a strong foreign accent as well as continental “affect.” Ford Madox Ford, his occasional collaborator, wrote in remembrance:

“He was small rather than large in height; very broad in the shoulder and long in the arm; dark in complexion with black hair and a clipped black beard. He had the gestures of a Frenchman who shrugs his shoulders frequently. When you had really secured his attention, he would insert a monocle into his right eye and scrutinize your face from very near as a watchmaker looks into the works of a watch.”

Another of his friends and near-neighbors, H.G. Wells, put it thus in his Experiment in Autobiography:

“He had learnt to read English long before he spoke it and he had formed wrong sound impressions of many familiar words; he had for example acquired an incurable tendency to pronounce the last e in these and those.  He would say, ‘Wat shall we do with thesa things?’ And he was always incalculable about the use of ‘shall’ and ‘will.’”

To be one of the principal figures of 20th century English literature is therefore doubly to Conrad’s credit, and such novels as Lord Jim and Nostromo are likely to stay in the canon. By comparison, The Shadow Line: A Confession (1917) is a relatively minor effort, composed near the end of the author’s career. If not directly revelatory—such as his The Mirror of the Sea (1906) or A Personal Record (1912)—it nonetheless draws on his experience as a master mariner. That designation, it can be argued, is as unlikely and remarkable as later becoming a celebrated author. To have been accepted into the hidebound hierarchy of the British Merchant Marine is in its own way improbable in the extreme. The Shadow Line: A Confession records that process, although in fictive terms.

Most of Conrad’s early manhood was in fact spent at sea. “In the destructive element immerse,” a character in Lord Jim counsels the book’s narrator, and immersion and near-drowning remains the story here. Famously, Conrad wrote about the trials and tribulations of shipboard-adventure in the novella, Heart of Darkness (1899). Another of his short fictions, “The Secret Sharer” (1909–1910) most nearly resembles this novel: the questions of identity in duress and vocation under stress haunt and dominate both.

The nameless first person narrator of The Shadow Line seems a stand-in for our author during his first command—in this case in the Gulf of Siam  The ship itself was “shipshape,” the crew appeared ready and able, the circumstance of hiring, if secretive, was rapid: all augured well. But “the Confession” that is the book’s sub-title deals with doubt and even terror as the trip gets underway.

To begin with, he’s elated: “A ship! My ship! She was mine, more absolutely mine for possession and care than anything in the world, an object of responsibility and devotion. She was waiting for me, spell-bound, unable to move, to live, to get out into the world (till I came) like an enchanted princess. Her call had come to me from the clouds.”

This romantic elation, however, soon enough turns to concern. The new captain’s first mate, known only as Burns, is bed-bound and maniacal, his crew turns sickly also, and the ghost of the previous captain haunts the ship. His one reliable sailor, a cook by the name of Ransome, has a heart condition and must not overtax himself. The store of quinine—a medicine with which he hopes to cure or at least help his men—has been pillaged and left empty, and he has no able-bodied help.

Most of the prose is descriptive—and, it must be admitted, high-pitched. “After sunset I came out on deck again to meet only a still void. The thin, featureless crust of the coast could not be distinguished. The darkness had risen around the ship like a mysterious emanation from the dumb and lonely waters . . . Not a sound.” Or, at the start of Part II, “It was impossible to distinguish land from water in the enigmatical tranquility of the immense forces of the world. A sudden impatience possessed me . . .”

The reader may be forgiven a similar impatience; very little happens here. Conrad was never at his best describing women; there are none in this narrative, and the secondary figures (a doctor, a retired captain, a rival for command, a clerk) are sketchy at best. The Melita strives for open sea but lies becalmed while its sleepless pilot yearns for wind. Then a gust or two propels him into outer darkness and rain. His crew is too short-handed and weak to do more than tack from windward to leeward and after weeks they return from the mouth of the Gulf to the very port from which they had departed.

What remains, and vividly, is the portrait of a man adrift—uncertain as to his role in the world or how to steer safely home. “There were moments when I felt not only that I would go mad, but that I had gone mad already; so that I dared not open my lips for fear of betraying myself by some insane shriek.” When “the dark night of the soul” descends it does so with a vengeance. “Such must have been the darkness before creation . . . Neither could I see anything . . . everything was blotted out in the dreadful smoothness of that absolute night.”

In the end, a sense of duty powers past inertia, and The Shadow Line records devotion—in both meanings of the word, to mastered “craft.” We readers should be grateful for its re-release.