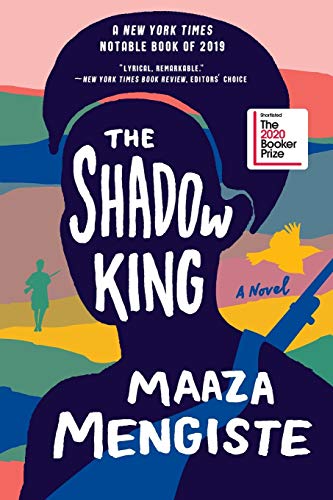 “within these pages, there are passages that approach the sublime. There is pain, anguish, horror, and sadness, alongside passages of subtle human feelings conveyed without words. These can be devastating, enlightening, and, at times, exhilarating.”

The Shadow King is Maaza Mengiste’s second novel and a finalist for this year’s Mann Booker Prize. Her first novel, Under the Lion’s Gaze, dealt with the overthrow of Haile Selassie and the reign of terror that followed. The Shadow King is set primarily during the Italian invasion of Ethiopia in 1935, but it opens and closes with a scene in the Addis Ababa railroad station in 1974 during the protests and riots that led to the overthrow of Emperor Haile Selassie.

The main character in The Shadow King is a young peasant girl, likely a slave, named Hirut, whose life is the central line running through the novel. She is notable for her tenacity, independence of mind and action, and her major role within a large force of Ethiopian women who organize a military unit to battle the Italians. Hirut is a character inspired by Ms. Mengiste’s great-grandmother, who was one of many Ethiopian women who fought alongside the men during the Italian war.

After Hirut’s parents were killed and their land stolen, she is taken under the wing of the Dejazmach (military commander) Kidane who was a close friend of Hirut’s mother. Kidane’s wife, Aster, is not pleased to have a young girl near to her age brought into the household. Hirut rooms with “the cook,” who is known only by that name throughout the novel. Their relationship is close, but at times strained as well.

In this early section of the novel, the relationships between Hirut and these three principle characters is frequently laid out in harrowing and sometimes violent terms. The same can be said of the relationships among the other characters. All exhibit very strong wills resisting the norms laid out by their respective social status as wife, servant, or woman. As to Kidane, he is determined to exercise and maintain his privileged status.

When the Italians enter the picture, new characters are introduced. Colonel Carlo Fucelli is the Italian commander of the force coming in from the north. In his orbit is Ibrahim, commander of the Ethiopians who have joined the Italian side in the war, and Ettore Navarra, an Italian photographer whose parents are of Ukrainian Jewish background. Fucelli will be joined by Fifi, an Ethiopian prostitute of great beauty and intelligence. Attending Fifi is “the cook.” These are the main characters in the novel, and the story will be told by and about them. Their relationships will constitute a complex set of developments. The Shadow King is a peasant with a physical appearance closely resembling the emperor.

The main moral thread, running from the opening of the story in the Addis railroad station to the conclusion in that same location, ties the lives of Hirut and Ettore, the Italian photographer, together. The main action of the story is the war, and it is brutal with the Italian use of mustard gas, the bombing of civilians and hospitals, and the sadistic treatment of prisoners.

The narrative is divided into three main sections: The Invasion, the Resistance, and the Returns—all set between the opening and closing sections previously mentioned. Throughout there are reflective pauses designated as Interlude, Chorus, and Photo.

The Interludes generally develop the backstory of a character or event and offer important revelations about the lives of the main characters. Some of these Interludes consist of vignettes as the Emperor Haile Selassie reflects on incidents and episodes from his life. These are fascinating speculations on his family, his role as Emperor, and the contemporary world. Historically, Haile Selassie has a heroic/tragic air as victim of Italian aggression and betrayal by his allies. His speech to the League of Nations in 1936 is the stuff of legend. Ms. Mengiste is less impressed by the legend, although, she does portray him as a tragic figure.

The Choruses are similar to those in Greek tragedy, issuing warnings, encouraging actions, and commenting on developments. The Photo sections describe and reflect on particular photographs, many taken by Ettore, and sometimes involving one of the main characters.

All of these elements are woven together. Along the way, seemingly minor bits and pieces of information lead to a growing understanding of the narrative and cast new light on the main characters and their relationships.

The closing scenes in the Addis Ababa railroad station in 1974 have a mystical quality in which Hirut confronts Ettore, and at the same time she “sees” the Emperor. It is a powerful scene in which Hirut’s character is finally fully revealed.

At times, the writing in The Shadow King may seem a bit strained, but within these pages, there are passages that approach the sublime. There is pain, anguish, horror, and sadness, alongside passages of subtle human feelings conveyed without words. These can be devastating, enlightening, and, at times, exhilarating.

Finally, The Shadow King develops the landscape of Ethiopian culture, which will be a revelation to many outsiders. For those who have had contact with this ancient civilization or its contemporary disposition, it will be a reminder of those elements that both confound and delight the ferenj. It may even evoke the fragrance of burning eucalyptus and the sweetness of cinnamon tea.