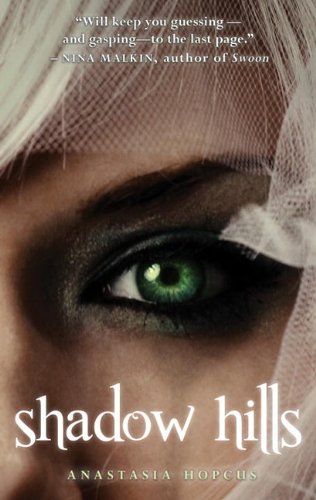 In the sudden vast over-abundance of gloomy teen dramas in the wake of the Twilight phenomenon, it’s getting harder and harder to find one that takes an original swing at the genre.

Shadow Hills starts with the feeling of a solid clone, setting up a chilly town of indirect light, deep secrets, that particular sort of grave-yards-and-old-buildings scenery that vampires love, plus beautiful mysteries—and ends quite differently. The tone would be familiar to fans of the larger franchise, but surprisingly, it comes out more ambitious: The dark brooding secret that haunts the town has absolutely nothing to do with vampires while simultaneously engaging and subtly rearranging the trappings of the vampire-drama trope, which is like a breath of fresh air in the genre.

Instead, it’s something in the space between science and mysticism, which makes it immediately more interesting and opens up a whole new area for the story to explore outside of the confines of another YA clone book. It goes on to be deeper than the lives of these few intense sixteen and seventeen year olds, successfully holding the feel and the weight of the much older plot line the main characters are only starting to see the results of in their own lives. Even more than this, the villain, though not as developed as he might have been in an adult novel, is nuanced and multifaceted and has solid reasons for what he does.

The book is not perfect. The pacing is a little off, lingering on the moping and moving too quickly through some of the action. A few important plot devices would have done better if they were introduced a bit sooner. Many interesting implications are never explored or even acknowledged—and a few of those are among the most interesting in the book. Some of the explanations are bland or vague, especially considering that Phe, the female lead, spends most of her time seeking them out.

But despite all this, it’s a nice read. Phe is stronger and more defined than the average love-drunk teenage girl, and the narrative boldly refuses the easy way to add character to Zach, the male lead-- namely, making him abusive or tortured or otherwise dangerous. The result is a heartthrob who’s a little on the side of safe, but he’s characterized well enough that he’s believable as a good guy, and he isn’t over-idealized. The shortcomings in the structure never interfere with the plot, and if this turns out to be the first of several books, they’d all be forgiven, written off as set-up for later stories rather than neat ideas that weren’t fully explored.

And best of all, the overall plot holds together well, and the conclusion makes perfect sense in the context of the rest. It’s a fast and engrossing read, and it’s well worth the 400 pages. What more could a reader ask for? Younger readers, especially, will find Shadow Hills haunting and beautiful, tragic enough to whet the appetite without beating anyone over the head with it, and complex enough to stay in the mind and linger like mist in a graveyard.