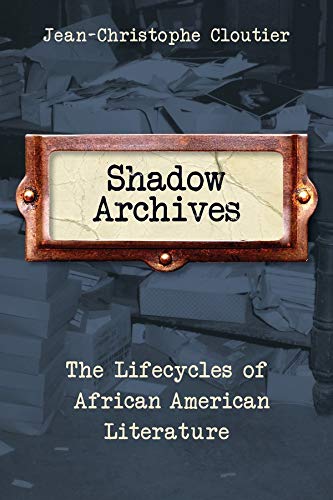 “Most compelling is Cloutier’s overarching purpose: to explore the deliberate, cautious, and sometimes frustrating ways Claude McKay and three roughly contemporary African American novelists—Ann Petry, Richard Wright, and Ralph Ellison—approached the archiving and preservation of their papers, and the degrees to which archival collections clarify and reconfigure their legacies.”

When Jean-Christophe Cloutier, now an Assistant Professor of English at the University of Pennsylvania, made a literary history-shaking discovery while methodically processing an unorganized archive as a graduate student at Columbia University in 2009; he did what any good archivist would do: He recorded his finding and went back to work.

Of course, that was only the first step of the journey that began the day Cloutier unearthed Amiable with Big Teeth, a complete, intact typescript of an unpublished 1941 satirical novel by Harlem Renaissance author Claude McKay, hitherto unseen by and unknown to any living McKay biographer or scholar of his work. After a protracted and painstaking process of authentication, the lost McKay novel finally saw the light of day in 2017, published with an informative introduction by Cloutier and his graduate adviser, Columbia scholar Brent Hayes Edwards.

Though reviewers divided on whether Amiable matched the standard of McKay classics like Home to Harlem and the magnificent Banjo, irrefutably, it illuminated the political and social climate of Harlem in the 1930s as no book written in 2017 possibly could, and reanimated and lampooned half-forgotten historical figures of the era with often alarming specificity. What’s more, Amiable’s emergence illustrated the unique power of archives to reveal such treasures, as well as the potential of the ignored, unpreserved, or unprocessed archive to bury them.

Cloutier’s new book, Shadow Archives: The Lifecycles of American Literature, recounts the Amiable saga, and more importantly contextualizes the novel in McKay’s career and specifically among the sources and materials on which he built both fiction and nonfiction he was producing at the time he wrote it.

Most compelling is Cloutier’s overarching purpose: to explore the deliberate, cautious, and sometimes frustrating ways Claude McKay and three roughly contemporary African American novelists—Ann Petry, Richard Wright, and Ralph Ellison—approached the archiving and preservation of their papers, and the degrees to which archival collections clarify and reconfigure their legacies.

Cloutier argues convincingly that the archives of African American authors of the last century bear heightened significance because of the ways in which their most important works were often ignored or underserved in their time if that time failed to coincide with those fleeting periods in which, as eminent Harlem Renaissance poet Langston Hughes described it, “the Negro was in vogue.”

Cloutier also argues that essential novels like Petry’s The Street, Wright’s Native Son, and Ellison’s Invisible Man, function as archives in and of themselves by capturing lives and perspectives typically “lost in the shadows of Harlem,” as McKay wrote in his memoir A Long Way from Home. “In short,” Cloutier writes, “these novels stand as some of our best sources for putting a spotlight on otherwise invisible aspects of African Americans’ quotidian realities of this period.”

Shadow Archives begins with the fascinating backstory of how the first major black literary archive came to be—with the James Weldon Johnson collection at Yale’s Beinecke Library, largely through the combined efforts of Hughes and white photographer Carl Van Vechten, author of Nigger Heaven, and both a constant presence and consistently polarizing figure in the Harlem Renaissance. Cloutier also describes the inevitable tensions that persisted in the Beinecke archive’s relationship with leading black authors, both because of its association with Van Vechten and an all-white university.

Cloutier explores the fraught interactions of author and archive most extensively in his discussion of Ann Petry and the backlogged archive that typifies her poorly tended legacy.

Shadow Archives divides neatly into four distinct and fascinating essays that tell essential parts of the story, beginning with a close reading of Amiable with Big Teeth, McKay’s difficult and often-destitute post-“Negro Vogue” years and his posthumous “Archival Rebirth.” Cloutier underscores the archival power of Amiable with Big Teeth to preserve a pivotal moment in Harlem’s history with unmistakable dimension and clarity via an apt analogy to James Joyce’s prediction, two years before the publication of Ulysses, that his novel would deliver “a picture of Dublin so complete that if the city suddenly disappeared from the earth it could be reconstructed out of my book.”

Another essay examines two quite different mid-century multimedia projects undertaken by Richard Wright and Ralph Ellison—one (Wright’s) published in its time, the other (Ellison’s) aborted and posthumously assembled in a 2016 art exhibit. Both projects focused on the Lafarque Clinic, Harlem’s grassroots psychiatric institution. In “Psychiatry Comes to Harlem,” Wright approached the clinic from a direct documentation angle, in a straightforward effort to bring attention and publicity to its work through images and text, and highlight its value and its needs. Ellison, by contrast, envisioned a photo-essay, co-authored with photojournalist Gordon Parks, titled “Harlem Is Nowhere,” with a much more subjective nature.

Cloutier makes much of what the archives reveal: how bits of pieces Ellison’s and Parks’s project surfaced in various forms over the years, but never in their intended 1948 configuration, and the failed undertaking’s impact on both men’s lives. “Their inability to give life to ‘Harlem is Nowhere’ in its original form turned into a productive haunting, its shadowy absence proving transformative over the course of the years.”

The real payoff of the preserved archival record of the unfulfilled promise of “Harlem Is Nowhere” emerges in the fifth chapter of Shadow Archives, an updated version of Cloutier’s 2010 essay, “The Comic Book World of Ralph Ellison’s Invisible Man,” which ought to hit any Ellison reader who’s never made the connection like a cartoon lightning bolt.

The link Cloutier finds forged in the archive between a haunting image seen in a “Harlem Is Nowhere” contact sheet and the indelible zoot-suited trio on the subway platform in Invisible Man all on its own makes Shadow Archives an essential read for anyone still plumbing the mysteries of Invisible Man. And who among us isn’t?