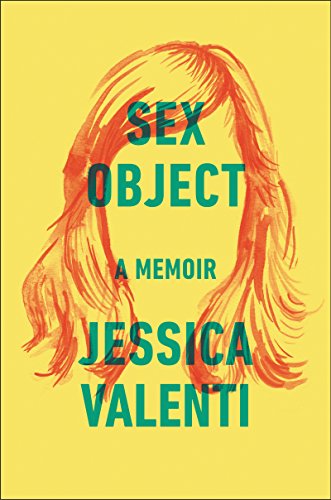 In Sex Object: A Memoir Jessica Valenti, a feminist writer and commentator, chronicles her teenage and young adult years of sexual harassment on the streets and in the subways of New York. “When I was twelve I saw my first penis on a New York City subway platform.” This sighting was the first of many.

Valenti believes that “we still have no name for what happens to women living in a culture that hates them.”Her grandmother had been raped as a young girl and her mother molested. Valenti’s high school teacher asked her on a date. She is determined to break this line of inheritance so that it does not touch her own daughter.

Despite her apparent street-smarts, and unlike some other Fourth Wave feminists, Valenti has apparently not evolved a coping strategy of calling out and ridiculing her abusers, but appears to have resigned herself to a condition of serial victim.

What are we supposed to make of the fact that she jokes with her friends that she is some kind of flasher-magnet? Does she want us to show sympathy and support or be tricked into political incorrectness by asking, as her mother does “What were you wearing?” which is to say “Were you asking for it?”

The point of this memoir is perhaps that it is, despite the author’s worldly success, an extended expression of insecurity and low self-esteem. She is ashamed of the sexual attention and humiliation that she attracts; socially insecure relative to husband Harvard-educated Andrew and his friends; and aesthetically insecure relative to her beautiful mother, “a woman so beautiful men would politely stop her in the street to tell her so.” Clearly she and her mother walk on different streets.

In high school Valenti morphed from being from being the “the dowdy friend of cute girls to the dowdy friend with big tits” and began obsessing about her big breasts rather than her big nose. She stopped being bookish and launched on years of unsatisfactory relationships—Jay, Paul, Kyle, Carl, Ron—along with ingesting massive amounts of alcohol and other substances.

She confesses that “doing the right thing has never come easy to me;” she sees herself as a cheat and a liar and “after decades of life and feminism, I still somehow believe that my job is to protect men at all costs.” She also tellingly feels that as a feminist she should fail in order to be faithful to the cause as “success is not feminist.” This is a strange interpretation of feminism.

The book comes alive with sincerity and passion in the moving later chapters concerning her love for her child who has “selective mutism” an anxiety disorder which means that she will only talk to adults. These chapters feel almost too intimate and heartfelt after the raunchy confessional tone of the earlier chapters.

There is something uneasy about the juxtaposition of different styles and substance. Is the reader supposed to draw some causal relationship between Valenti’s experiences and her child’s condition, or to see her evident adoration of the child as redemptive? What does Valenti want of us here? Perhaps she doesn’t know herself?

The book ends with ten pages of Endnotes of abusive emails Valenti has received between 2008 and 2015.

Fluently and often wittily written it is an easy read and with its mildly sensational title and content may sell well; however, it is hard to see this as a “memoir” or as a contribution to the feminist cannon. What is Valenti trying to say? “I too have had very unsatisfactory and abusive sexual encounters and relationships and have come through it. And (therefore) I’m a feminist.”?

Do women or men really still need to be made aware that sexual abuse and harassment online and in the streets is a problem? Perhaps there is more need to look at ways this could be addressed? These cathartic pages from Valenti’s diary seem to have escaped into print before she had worked through what she really wanted to say and to whom.