Sex on the Moon: The Amazing Story Behind the Most Audacious Heist in History 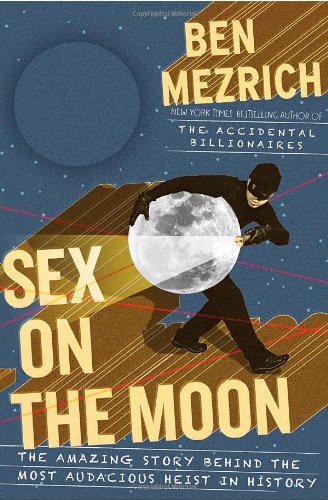 “This book would make a great novel. Unfortunately, it’s a true story, which reduces the work to an interesting tale of how and why a big heist was pulled off by a brilliant fool.”

This book would make a great novel. Unfortunately, it’s a true story, which reduces the work to an interesting tale of how and why a big heist was pulled off by a brilliant fool.

The author, Ben Mezrich, tries to enliven Thad Roberts’ escapade with suspense-novel writing style and a catchy title, but the narrative fails both to be suspenseful—the ending is known before the story begins—and to live up to its subtitle: “the amazing story behind the most audacious heist in history.” What is amazing is that somebody would be stupid enough to try what Thad Roberts did, and his audacity comes across as egotism in disguise.

Readers who love capers with a romantic twist that give the shaft to government institutions, and who are able to suspend their values the same way one suspends disbelief with a novel, will enjoy this book. Others may be offended by the disrespect shown to the U.S. space program first by Thad Roberts, through his acts, and next by the author, through his indirect glorification of the man who stole a national treasure, and his report of a 2002 crime that will embarrass NASA all over again. The publisher rubs it in by describing the book on the jacket as a “madcap story of genius, love, and duplicity, all centered around a heist that reads like a Hollywood thrill ride.”

The sad thing is, Thad Roberts could have been a heroic character. He escaped from a repressive religious upbringing; applied himself to gaining the education, skills, and social training he needed to attain his goal of becoming an astronaut; and made many sacrifices through the long, hard years it took to reach NASA. A bit of luck finally got him in the door, but that luck would not have happened if he hadn’t thoroughly prepared for it.

His career might have led to fulfillment of his dream, given the enormity of his talents; however, “fantasy had always been his true talent,” writes Mr. Mezrich, and that combined with Thad’s arrogance led him to think that rules are for everyone else. He demonstrated this through petty thievery, high-risk antics, and ultimately the moon rock heist, using his brains to outsmart the system instead of investing in it.

Unlike fictional master thieves, Thad failed to anticipate all the consequences of his actions. Most anyone with common sense could have told him what would happen. But, possessed by romantic notions and dreams of glory, he decided that giving his girlfriend the moon—literally—was worth doing. The irony here is that he’d already won the woman’s heart, and she apparently loved him enough to join in the caper.

Sex on the Moon, therefore, is really about waste: wasted time, wasted energy, wasted money—life—love—opportunity. Oh, what other people could have done with the chance Thad threw away! He also wasted a slew of other people’s resources in catching, prosecuting, and incarcerating him.

Now, if the book is successful, he will regain some media attention, maybe even be able to publish the tome on physics he wrote while in prison. The author, who claims to “respect and admire” NASA, will profit from hanging out its dirty laundry again. Other people involved, who surely would prefer to remain in obscurity, will have their roles brought back to public consciousness. What a contribution this book makes to the world!

But, hey, it’s still a free country with freedom of speech and opportunity. Thad can reinvent himself (again) and tell his tale to anyone who wants to hear it, through whatever channel. By now he must wish he really was a fictional character, for in a novel or movie, the hero would have gotten away scot-free along with the goods and the woman, or else go out with a big bang. In actuality, Thad lost everything and will never recover it. He served his time, and will pay for one gargantuan mistake for the rest of his life.

Not a happy story.