Sex in the Digital Age (Sexualities in Society) 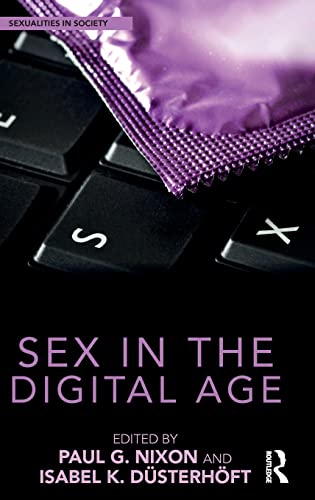 A half century ago, Supreme Court Justice Potter Stewart famously declared in Jacobellis v. Ohio (1964), “I know it when I see it,” to distinguish “hard” from “soft” core pornography, obscenity from art.

Three years later, in a now-celebrated article in a 1967 Partisan Review essay, Susan Sontag introduced the concept, “the pornographic imagination.” While speaking mostly of literature, she distinguished pornography from conventional literature in that it seeks to sexual arouse the reader. “Some certified masterpieces (from Chaucer to Lawrence),” she observed, “contain passages that do properly excite readers sexually.”

This book consists of 18 academic studies prepared by scholars ranging from undergraduate and graduate students, lecturers, researchers, and professors from U.S., European and Australian institutions. The editors, Nixon and Düsterhöft, affiliated with The Hague University of Applied Sciences, warn: “our collection [is] a wide ranging examination of digital sexual activities today which is also just the tip of the iceberg in terms of the range of sexual content and sexual activities empowered by using digital media.” We live in an age of global warming and, sadly, icebergs are melting so one must wonder if sex shares the same fate as the planet.

Each individual study runs a tightly-packed 10 pages or so (with the smallest type font imaginable) and share a common academic rigor, grounded in detailed analyses and innumerable references to prior studies. Most informative, many of the articles include materials from the author’s primary research.

In another piece, Abbi Bloedel and Jimmie Manning consider polyamory. They stress, “Most poly relationship—similar to monogamous relationships—have rules.” Online hookups permit participants to carefully check out each other and, most importantly, “explicit agreements are made that included details such as what sex acts are or are not permissible with whom . . .” Participants can also negotiate safe-sex practices as well as the nature of the engagement, e.g, a one-time hookup or building an ongoing relationship.

Jesus Gregorio Smith analyzes what he calls “two-faced racism” and how it operates in gay online websites. Drawing on extensive old-fashioned “participatory-observer” empirical research, the same racial stereotypes that operate in the offline world are mirrored—not surprisingl—in the online digital world.

In his concluding piece, Paul Nixon offers readers a guided tour of sex-tech in the coming digital age. He explores teledildonics or cyberdildonics, Internet–based remote-controlled sex toys that facilitate the “pleasure of stimulation.” These include for women, wearable vibrators and vibrators with a camera, and for men, a masturbatory sleeve molded in the form of a vagina or mouth.

Looking into the future, the editors note, “advancements in other digital potentialities such as [sex] robots, augmented reality (AR) and artificial intelligence (AI)”—virtual reality (VR)—“are already changing the ways in which we view sex.” Sadly, the book does not include serious considerations of these topics, the cutting edges of digital sex.

A specter haunts this book, the specter of the commercial marketplace, of capitalism. While unnamed, it is alluded to in each study. The digital technologies the book so solidly considers empower the commercial sex industry, one that has become a $50-plus-billion enterprise. The collection would have been helped with a piece that considered the Internet’s place in the commercial supply chain. In the good old days of American sex culture, those seeking sex-related products (e.g. toys, videos, costumes) were known as the “raincoat crowd” and had to search for a retail outlet, often in the “worst” parts of town. Those days are over.

Digital technologies facilitate social commerce and sexual culture. Without a personal credit card and a direct-to-home distribution network, people—notably women—wouldn’t have had access to sex products. Sexuality is both a personal and commercial endeavor; one enormously private yet facilitated through the marketplace. Over the last half-century, the sexual marketplace has shifted from one driven by males to one driven by females. As a result, sex toys have been rebranded as “sex wellness” products, thus transforming sexual culture.

In One Dimensional Man (1964), Herbert Marcuse warned about the postwar sexual revolution: “The range of socially permissible and desirable satisfaction is greatly enlarged, but through this process, the Pleasure Principle is reduced—deprived of the claims which are irreconcilable with the established society.” Going further, he foresaw the future of sexual morality as repressive tolerance: “Pleasure, thus adjusted, generates submission.” Is this the sad truth of sex in the digital age?