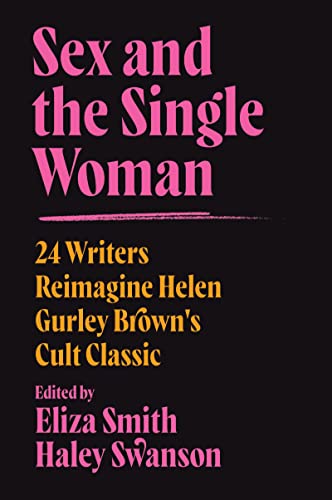 The ostensible template for these 24 musings on “singlehood” is Helen Gurley Brown’s 1962 cult classic, Sex and the Single Girl. The change from “girl” to “woman” is, of course, significant.

Beyond the editors’ Introduction and the first chapter by Brooke Hauser, who has written extensively about Helen Gurley Brown (HGB) (Enter Helen: The Invention of Helen Gurley Brown and the Rise of the Modern Single Woman, HarperCollins, 2016), there are very few nods in her direction from these authors as they struggle with the challenges and triumphs of singledom.

What exactly did HGB say? Where does she sit in the feminist or gender cannon? And with what success have these authors risen to the brief of reimagining her?

HGB’s famous 1962 publication, generally credited as being the forerunner to such hits as Sex & the City and Girls, expounded her belief in sex-positivity for single women; with advances in contraception women should go out and enjoy sex just as men did; what is more this approach would eventually snare them a rich (probably white) husband, such as her own, who supported and promoted her career throughout. The enormously successful magazine, Cosmopolitan, which she edited (1965–1997) expanded on this credo, (“How Good a Lover Are You?,” “Eliminate Those Upper Thigh Bulges”), but gave equal time to articles on property and investment, and importantly on paying your own way when it seemed appropriate, which was an important part of the HGB philosophy.

Most feminists of the time, such as Betty Friedan and Gloria Steinem (whose magazine Ms. magazine was set up in explicit opposition to Cosmopolitan and its ilk) deplored HGB’s philosophy and success, but joined forces with her and her enormous readership from time to time (on the ERA platform, for example) and even accepted generous writer’s fees for submitting articles to the magazine.

For most of her life Helen was a self-confessed “confused feminist,” and held not very advanced views on gender, racial, physiological, and other manifestations of diversity . . . (“her language is at times racist, homophobic, fatphobic, classist and ableist”); and she failed to acknowledge her own significant privileges as a rich, cis, white woman with a rich, adoring, and famous husband.

The editors of Sex and the Single Woman have assembled a group of women authors, including transwomen, who address aspects of singlehood, and the search for a fulfilling sex life that HGB ignored. These women are Black, brown, white; heterosexual and LGBTQI+; American, Korean, Bangladeshi, Vietnamese; mostly in their 30s or 40s, with one 65 year old; married, divorced, widowed or forever single; thin and fat; differently-abled; with a preference for a conventional coupling or “throuples and threesomes,” or more. Self-pleasure (“Self Help”) is a frequent resource, with at least two chapters featuring “the bathtub’s rushing faucets” as favorite partners.

Most of the chapters are rather brief, and do not explicitly explore their similarity to, or difference from, HGB. The most successful are those which put their sexuality and search for fulfilling sex into a broader context; for example, the different cultural norms of their parents; their own gradual awakening out of heternormativity; changes in gender theorizing and terminology. A few of them are humorous; “As an adult I’ve not been a light-candles-around-the bathtub kind of masturbator. I’m more of an eat-a-bag-of-chips kind of masturbator. A procrasturbator. The time I most reliably masturbate is when I’m in the early stages of writing something new . . .” (“The Animal Within the Animal”).

It is easy to pick holes in HGB and her creed, although as one chapter notes (“When a Man Isn’t a Man”), she only made the same classic mistake as Sheryl Sandberg, writing 50 years later, of urging women to get ahead by “leaning in” rather than by “flipping the table.”

Several of these 24 chapters are analytical and insightful, but if read consecutively, emit a rather dated sameness with their preoccupation (presumably their brief) with resolving or accepting singledom. It is hard to imagine a similar collection produced by a similar range of men. Indeed, it would have been very interesting to have included chapters by men, including Incels (Involuntary Celibates) who blame the emancipation of women for their condition. This is a collection of essays about women, written by women, and for women.

The editors could also have produced a closing chapter reflecting on whether and by how much women’s lives have actually changed since the 1960s. The passage of time does not have to indicate progress in gender equality or anything else! And we may be sure that the model of sexuality promoted by HGB was not the only one available even in 1962. Interestingly HGB was not allowed by her publishers to speak directly of contraception or abortion, and her book pre-dates Roe v Wade (1973), which is right now being rolled back.

In her opening chapter (“Her Voice”) Brooke Hauser notes that although “in many ways we still live in a man’s world . . . it is not 1962, and women are speaking up and out, demanding change . . .” This book does not quite convince that they are speaking other than to each other.