Sex and the Constitution: Sex, Religion, and Law from America's Origins to the Twenty-First Century 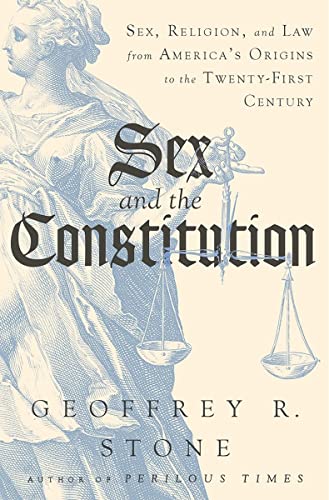 Geoffrey Stone’s Sex and the Constitution: Sex, Religion, and Law from America's Origins to the Twenty-First Century is one of the most important books that, sadly, all too few Americans will likely read. Ironically, it was published as the U.S. Senate considered the nomination of Neil Gorsuch, a federal appellate judge, to the Supreme Court to fill the vacated seat formerly held by Antonia Scalia. Stone’s weighty, yet easily readable, study is a counter brief, a humane rejoinder to the conservative beliefs shared by Scalia and Gorsuch.

Stone is the Edward H. Levi Distinguished Service Professor of Law at the University of Chicago Law School. He is a noted First Amendment scholar and is author of a half-dozen learned works on the law and American life. In Sex and the Constitution, he examines the nation’s social evolution through the illuminating lens of sex and the law, subjects he knows exhaustively well.

The book is divided into a series of sections providing a narrative thread of almost historical inevitability in the development of America’s sexual culture and the laws that ostensibly set the boundaries of acceptable sexual practice. Stone offers a useful introductory pre-history of Western legal theory concerning sex, religious belief, and lawmaking from the days of the Israelites and Greeks to modern England.

The introduction sets the stage for the four centuries of American legal and social history that follows. The book is a rigorous overview on three key aspects of U.S. sexual culture—(i) free speech and obscenity, (ii) birth control and abortion, and (iii) homosexuality and sexual identity. The author draws heavily on court decisions, critical scholarly legal debates, innumerable secondary studies, and the experiences of the men and women who played pivotal roles in this often painful process.

Stone divides the nation’s sexual history into two major phases: before and after the Second Great Awakening. The Great Revival was a religiously inspired millennial movement that flourished for a half century, between 1790–1840, and sought to replace austere Calvinist dogma with evangelical spiritual renewal.

For the first two centuries of its existence, the nation evolved from 13 fledgling colonies, through a revolution and to the founding of a new nation. For most early Americans, excluding New England Puritans, private sexual practice really didn’t matter. Stone stresses that the leaders of the new nation, those who gave us the Constitution and the Bill of Rights, were secularists, guided by core British beliefs in personal liberty and Enlightenment rationalism.

Stone stresses that following the signing of the Constitution, the new nation’s rapid development fostered social dislocation that led to a religious-revivalist movement that swept the still small—and predominantly rural—nation. The Second Great Awakening turned sex into not simply a religious or moral issue, but a political and, increasingly, legal battleground. It marked the nation’s first culture wars.

The Great Revival began in upstate New York in what was known as the “burned over” district—named for its religious fever—and spread rapidly throughout the westward-expanding country, especially into rural America. It spawned the Mormons (followers of Joseph Smith), the Millerites (followers of William Miller), the Seventh-day Adventists (followers of Ellen White), and the Jehovah’s Witnesses (followers of Charles Tae Russell). The spirit of renewal contributed not only to the temperance movement of the 1820s, but to the abolitionist movement of the ’30s and the feminist movement of the ’40s. It also inspired the 19th century utopian movement that included the Nashoba, Shaker, and Oneida communities.

Stone argues that two fundamental challenges have faced the nation since its founding and shaped the legal debates over sex. First, is American—and what later became the United States—a religious or a secular country? Second, do Americans have a “right” to sexual pleasure, something different than the requirements of procreation? He seeks to address these profound questions through a comprehensive examination of, as the subtitle states, “sex, religion, and law.”

In the two centuries following the Second Great Awakening, sex increasingly become a terrain of struggle confronted in terms legal, religious, commercial and personal concerns. Stone chronicles this tug-of-war over moral order, patiently arguing that while history—what others would call “capitalism”—transformed the nation and personal life from an agrarian to a modern then postmodern country. This development also remade sexuality.

Stone details how the religious right waged repeated “culture wars” against what it identified as threats to the nation’s moral order. He argues convincingly that the ups and downs in this struggle mirror swings in the nation’s fortunes, occurring during periods marked by social crisis and economic instability. We are in such a period today.

Regarding more substantive oversights, the absence of thorough consideration such key aspects of American sexual culture like prostitution and sex toys is striking. Other than a look-back to Comstock-era prostitution, one wonders why a business —illegal in all but a handful of rural districts of Nevada yet is an $18 billion industry—is not addressed?

Similarly, the $10-$12 billion sex-paraphilia market goes unacknowledged; this is especially critical because two Circuit Courts have adopted opposite interpretations of the all-important Lawrence v. Texas (2003) decision regarding personal privacy—and this issue may well come before the new Court.

The book’s strength—and weakness—is that it is a grand look back, not a look forward. Remarkably, in our 21st century world, Stone does not recognize that technology plays a critical role in sexual culture—pushing sex forward, with the law struggling to catch up. He does not even mention sexting, the first original form of pornography in the 21st century. Numerous young people—and an increasing number of adults, including politicians—are engaged in sexting, with a good number of young people being arrested under outdated obscenity laws.

Stone concludes his valuable study on a cautionary note, one that anticipates Gorsuch’s appointment: “A change in the makeup of the Supreme Court could cause a dramatic shift in the extent to which the Constitution is understood in the future to guarantee the [sexual] freedoms that have thus far been recognized.” Sadly, the future is now.