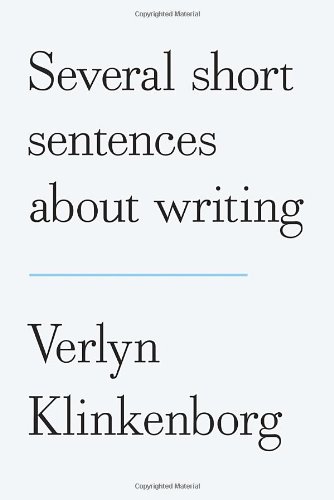 To paraphrase Voltaire’s statement concerning the Almighty, “If Verlyn Klinkenborg did not exist, it would be necessary to invent him.”

Because having read his new book Several Short Sentences About Writing, I do not think that it would be possible to not have this book on hand.

In a short work, Mr. Klinenborg has writ large.

He has, in fact, transcended his genre (which will likely come as faint praise, given that he writes: “Genre is meaningless/It’s a method of shelving books and awarding prizes.”) and given us something finer, greater than just another How to Write guide for a world crowded with both writers (some delusional) and those damned guides (most useless).

Verlyn Klinkenborg has created a devotional on the subject of writing. A paean.

And no other book, old or new, is as well reasoned as this, as entertaining or as wise.

“Most of the sentences you make will need to be killed.
The rest will need to be fixed.
This will be true for a long time.
The hard part now is deciding which to kill and which to fix and how to fix them.
This will get much, much easier, but the decision making will never end.

“A writer’s real work is the endless winnowing of sentences,
The restless exploration of possibilities,
The effort, over and over again, to see in what you started out to say
The possibility of saying something you didn’t know you could.”

With such winnowing as this, even his affectation of word placement upon the page is soon forgotten.

Given that we live in a world of language, that, like the fingertips of the customers in Madge’s black-and-white beauty parlor in the commercials that we watched at dinnertime in the once, long ago, we’re soaking in it, there is perhaps no greater need today than this: a simple, short book that tells us not only how to write, but how to read as well. And that presents some simple guidelines for each.

No other book, for example, posits “The writer’s world is full of parallel universes.”

“Revision isn’t only the act of composition.
Revision is thinking applied to language.”

No other book on writing so recognizes the irrelevance of the irrelevant: outlines, writer’s block, compound sentences, while focusing in on that which matters: the music implicit in all writing, the real purpose of writing (“Writing doesn’t prove anything,/And it only rarely persuades./It does something much better./It attests./It witnesses.”).

Indeed, no other book is as filled with as much grounded, practical advice for putting words to the paper or electronic page or gives better, more helpful exercises that are ripe for the picking in every high school and college level course in creative writing. And, please God, let this become the standard text in every MFA program in America.

From here, my choices in reviewing are two: to trust that my point has been made (Best book on writing. Ever.), or continue onward and risk the Wrath of Klinkenborg:

“A cliché is dead matter.
It causes gangrene in the prose around it, and sooner or later it eats your brain.
You can’t fix a cliché by using it ironically.
You can’t make it less gangrenous by appearing to ‘quote’ it or invert it or joke about it.
A cliché isn’t just a familiar, overused saying.
It’s the debris of someone else’s thinking,
Any group of words that seem to cluster together ‘naturally’
And enlist in your sentence.
The only thing to do with a cliché is send it to the sports page
Or the speechwriters, where it will live forever.”

In short, Several Short Sentences About Writing belongs on every desk, in every home, right beside Strunk & White’s The Elements of Style. Both remind us that we are all writers, that words are all we have to make our thoughts and feelings understood, to convey information, and to ease each task of building and sustaining a culture. And both books make better writers of us all.