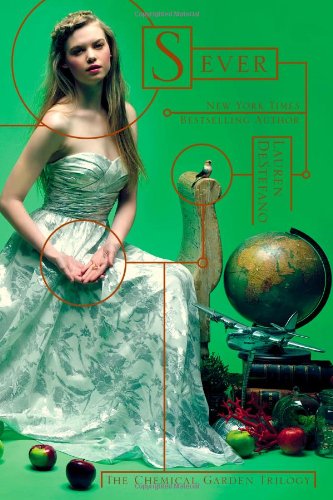 “Readers will find themselves cheering the protagonist, eager to find that light at the end of the tunnel . . .”

Sever is the final book in The Chemical Garden Trilogy, picking up exactly where Fever, the second book, ended.

Our teen heroine Rhine has been recaptured by her father-in-law, Vaughn. As part of his eagerness to find a cure for the virus that plagues the young people of the day, Rhine is subjected to his torturous experiments against her will.

She escapes and finds sanctuary with a surprising savior: Vaughn’s brother, Reed.

Rhine now knows her own brother, Rowan, is alive, but he’s not the boy she remembers. He’s part of an underground rebellion that’s bent on destruction. She has to let him know she’s still alive before his grief pushes him to carry on with his plan for total destruction.

Time is running out as each year brings Rhine closer to falling prey to the deadly contagion—and the consequences of such an event.

Lauren DeStefano does an excellent job of letting us know who the characters are from the inside out and from their relationships with each other. She then takes their interconnectedness to unexpected realms.

Ms. DeStefano is not afraid of letting bad things happen to good people. There are a number of revelations and delicious twists that will leave readers more than a little surprised and perhaps even saddened.

Ms. DeStefano excels in world building in The Chemical Garden series. The development of the rather dark and dreary environment plays a solid part in setting the stage for the action. This in combination with the well-fleshed-out characters and how they interact with one another makes for a compelling YA experience. And in spite of the somberness, the author displays unusual writing skill in her ability to evoke an undercurrent of hopefulness.

Readers will find themselves cheering the protagonist, eager to find that light at the end of the tunnel right along with the book’s characters and wishing them the very best in their search for a better world in which to flourish.