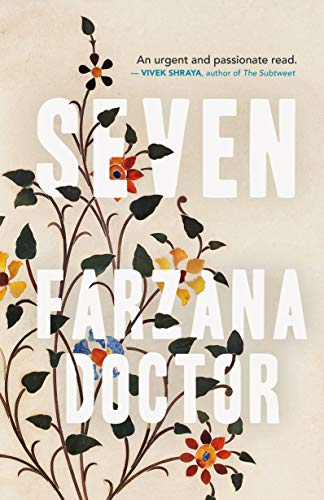 “I cannot stop this moving train,” says Sharifa who has returned to the country of her childhood, India, with her husband and their seven-year-old daughter, Zee.

Sharifa is slurping chai tea from a saucer with her favourite auntie Tasnim Maasi.

“I’m sorry, I’m very sorry, there’s something I need to tell you,” Sharifa says. The journey of this book has led to this moment. But of course, we don’t know the stakes of these words yet, it’s only the first chapter.

Now it’s 2015, in New York and Sharifa lets readers in on her life before her holiday to India: including her husband, her daughter and the state of her marriage and her sex life. Her husband comes from the same sect and community in India as she does; their daughter is a delight; joyful and open to the world and her life ahead. er hubSharifa has never been orgasmic, but it only bothers her as the one possibly small thing askew in her practically perfect nest.

She and her husband, Murtuza, plan a trip to India where Sharifa will research her ancestry, discovering that “Everyone in our family is related to one another.”

She “meets” Abdoolally through his own legend, a rich male ancestor who was influential and known by everyone she meets, but her interest quickly shifts to his four wives: two died in childbirth, one divorced amidst a scandal, and the last one outlived him by many years. Sharifa’s modern mind takes note of women’s value in this society she left so many years ago.

Here, in the midst of her extended family and her Bhora Muslim community, Sharifa also revisits events of her childhood with two of her favourite cousins, who are roughly her same age. One of these cousins, Faetma, instigates an online protest against “khatna,” the religious practice of nicking the clitoris of all girls when they are seven. The practice, handed down by the male religious leaders is not spoken about in the community except in hushed tones, but it is dutifully carried out by the women in the family: beloved aunties, grandmothers, sisters, cousins. The justification to believers who continue this practice is that it’s just a small nick, nothing really, and it helps to keep women faithful to their husbands. It’s tradition.

Sharifa discovers with horror that female genital mutilation is always buffered by lies and deceit. The girls are led into situations with trusted family members and then violated, “nicked,” usually by a stranger in a location previously unknown to the girls. There is usually no warning, no context, no reason why, and no explanation. Only ice cream and small talk afterward.

When Sharifa confronts these realities about this practice that her two cousins both admitted to undergoing, she begins to question why she has no memory of it. After all, she was seven, here in the midst of this religious community, at the same time and age they were.

With the growing realization that this practice blooms around her in her modern Mumbai Bohra community, Sharifa begins to understand the lifelong impact of Khatna on all girls who are violated by it, both physically and emotionally.

“Khatna warns girls that no place is safe,” Sharifa discovers.

The tension in this story is not only the protagonist’s gradual discovery of profound betrayal in her past, it is also the fact that her daughter Zee is exactly the same age when most girls in the Bohra community are ambushed by this abhorrent practice. By this time, at every mention of Zee’s activities, the reader races to the possibility that someone, in their zealous desire to fulfill this religious practice, might also harm the innocent seven-year-old.

Faranza Doctor creates a vibrant world full of the conundrums of belonging in community; the insidiousness of belief and its silent power, the meaning of being female, surrounded by centuries of a culture and religion created around using women’s bodies for the benefit of men. Doctor’s discussion in this story remains interesting to the end because her protagonist straddles her desire to remain in the family, embraced by her community with the inherent menace against herself, her daughter, and all women, embedded in the culture. Because she wants to retain her friendships and the connections forged in childhood—and in spite of the betrayals inherent in belonging, Sharifa must navigate her love, her sense of trust, and in doing so, discover her own moral fabric and her own identity, set in relief against her upbringing.