Seven Flowers: And How They Shaped Our World 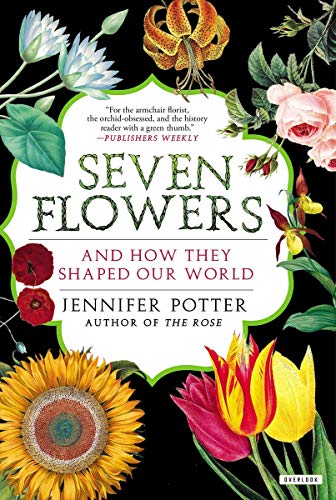 We should be grateful that the sunflower has no sweet fragrance. According to the 17th century Jesuit Henry Hawkins, the exceptional beauty of the flower and it’s singular properties of great height (“the loftie Cedar of flowers”) and tracking the sun throughout the day (“the Gnomon of the garden”) combined with any suggestion of fragrance, would have made men, “stark mad indeed, with doting upon it.”

This observation is just a sample of the fascinating tidbits of information author Jennifer Potter shares with her readers in Seven Flowers and How They Shaped Our World. The seven flowers are lotus, lily, sunflower, opium poppy, rose, tulip, and orchid.

We learn that opiate tinctures for children were common in the Victorian era, with reassuring names such as McMunn’s Elixir, Bately’s Sedative Solution, and Mother Bailey’s Quieting Syrup. It’s no wonder the Wicked Witch of the West, who was conceived by L. Frank Baum in 1900, tried to stop Dorothy and her companions from getting to Oz by lulling them to sleep in a field of poppies.

The lotus is imbued with rich meaning in many countries, including Egypt, India, China, and Japan. The roots of a lotus flower extend into the mud and the stem grows up through the water with the flower blooming above the surface. Drawing symbolism from these properties, in Buddhist philosophy, this pattern of growth signifies the progress of the soul from the primeval mud of materialism, through the waters of experience, and into the bright sunshine of enlightenment.

In the Hindu faith, the lotus is the foremost symbol of beauty, prosperity and fertility. According to Hinduism, within each human is the spirit of the sacred lotus.

In Western iconography, the lily is a potent religious symbol representing innocence, purity, and chastity. It is closely connected with the Virgin Mary. Egyptians and the Greeks valued it in their perfumes, particularly formulas created for men who preferred light fragrances rather than lingering oils such as myrrh and sweet marjoram, which were favored by women.

The rose was extolled as the “Queen of Flowers” in 600 BCE by the Greek poetess Sappho. We get our expression “sub rosa,” meaning under the rose, from the Roman myth where Cupid gave Harpocrates, the god of silence, a rose as a bribe to keep him quiet about the amours of Venus. The rose became the emblem of silence and was sculptured on the ceilings of banquet rooms to remind the guests that what was spoken under the influence of wine was not to be repeated later. Guests were literally sub rosa. In the 16th century, the rose was carved over confessionals.

Most readers are familiar with the Dutch “Tulipmania,” an early example of a market bubble. Demand for tulips became frenetic as peer pressure goaded people into pay higher and higher prices for a rare specimen. At the peak of the mania, in March 1637, some single tulip bulbs sold for more than 10 times the annual income of a skilled craftsman.

Less known, perhaps, is that tulips with the, “glorious colours, variously mixed, edged, striped, feathered, garded, agotted, marbled, flaked, or speckled,” as the English botanist Joan Rea wrote, were actually diseased. It was he Flemish botanist Carolus Clusius who realized these tulips were sick and dying. He opined, “. . . that any tulip thus changing its original colour is usually ruined afterwards and wanted only to delight its master’s eyes with this variety of colours before dying, as if to bid him a last farewell.”

The immense orchid family (Orchidaceae) gets due attention. It is one of the largest plant families on earth with the greatest diversity of flora. According to Potter, “The Royal Botanic Gardens at Kew estimate there are some 25,000 species in 850 genera, compared with the rose’s paltry 150 species in a single main genus, Rosa: hybrid orchids add at least 155,000 more recognized varieties, as of March 2012, increasing at the rate of 250 – 350 per month.”

Individually, the facts and anecdotes Potter relates about each flower are interesting. She has researched broadly and shares generously the gems she has mined, but there is nothing to connect the information, nothing to give it meaning or coherence.

For example, within a few pages, Potter jumps from describing the sunflower’s place in the aesthetic movement in late 19th century England with Gilbert and Sullivan lampooning Oscar Wilde in their operetta Patience, to Vincent van Gogh’s brilliantly painted sunflowers, to the importance of sunflower seeds as a welcome oil-rich food source in Russia when the Russian Orthodox Church banned other oily foods during Lent.

Within paragraphs we are hurried from century to century and hurtled from continent to continent. Often the text has a staccato feel as the thousands of “gee whiz” facts and fancies are tossed our way. Sadly, Potter never reaches a crescendo when all the disparate notes are brought together to form a greater meaning.

I found myself thinking of Henry Hobhouse’s 1986 book, Seeds of Change: Six Plants that Transformed Mankind. In it, Hobhouse explores in depth how quinine, sugar, tea, cotton, cocoa, and the potato, have influenced the course of human affairs socially, economically, and politically. While the seven flowers Potter focuses on also have influenced human economics, social, religious, and political life, Potter’s text never really lives up to the promise of her title. I didn’t come away with any insight or aha! connection in my understanding of how these flowers have indeed shaped our world.