Seven and a Half Lessons About the Brain 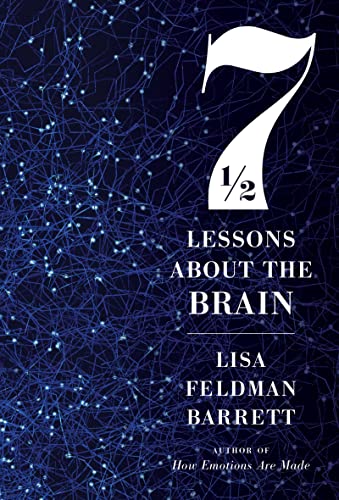 “As a welcome surprise, Seven and a Half Lessons is part self-help book on how to manage our own quirky brains and part manifesto on how to move forward to heal this country’s political divisions.”

Esteemed author Lisa Feldman Barrett’s book is about far more than what constitutes human nature and the function of our amazing brains. Although steeped in neuroscience, this slim volume spans the fields of anthropology, sociology, archaeology, history, and evolutionary psychology and biology. It delves into what it means to be physically and emotionally human and how we can learn to build a thriving community with a brain that simultaneously brings out the best and worst in us.

Its “informal essays” debunk misconceptions about what we call human nature and our belief that the brain’s primary purpose is to think. Instead, Barrett invites readers to use what they learn from these essays to consider “the kind of human you are or want to be.”

The book introduces us to amphioxus, an organism Barrett describes as a stomach on a stick that was equipped to do little more than digest whatever food came its way some 550 million years ago. As organisms evolved from amphioxus into hunters into danger-sensing creatures with motor systems, they became more complex and morphed into energy-efficient operators. Energy conservation, not the ability to “think,” is what eventually led to the development of the brains we possess today.

Barrett explains that our brains did not evolve toward any particular goal “because evolution does not act with purpose—there is no ‘why?’” Our brain’s most important function is not to be rational, emote, imagine or empathize. It’s to manage allostasis or the budgeting of body energy—“by predicting energy needs before they arise so you can efficiently make worthwhile movements and survive.” The brain evolved in this direction because “Creatures that predicted correctly most of the time, or made nonfatal mistakes and learned from them, did well. Those that frequently predicted poorly, missed threats, or false-alarmed about threats that never materialized didn’t do so well.”

The author describes our earlier stabs at explanations for the function of the brain. In ancient Greece, Plato posited the concept of the triune brain which was composed of three forces: basic survival instincts like hunger and sex drive, emotions, and rational thoughts that were thought to promote civilized behavior. Then in the mid-20th century, physician Paul MacLean built on Plato’s triune theory by introducing the ideas of brain layering and the neocortex. Brain anatomy theories by Charles Darwin and Carl Sagan followed.

Since then, the concept of humans possessing a lizard’s or emotional-beast’s brain has been disproven by science, along with there being “no such thing as a limbic system dedicated to emotions.” Barrett laments that these ideas are still being promoted in some quarters by people who should know better. In truth, the author explains, there are no separate, distinct systems for thoughts and emotions, each of which can be either rational or irrational. Based on this recognition, Barrett emphasizes that humans are not more highly evolved than other species—only differently evolved—and that they are not inferior to us.

She describes the brain as a network of neurons and synapses, many of which are multi-functional and work to human advantage, comparing these networks to airport hubs and explaining that “Scientists speculate that over evolutionary time, neurons organized into this kind of network because it’s powerful and fast yet energy-efficient and still small enough to fit inside your skull.” Neural connections were able to strengthen or weaken, giving us the potential for brain plasticity or new learning. Eventually such complexity led to flexibility (always a winner in terms of survival) and memory storage which begat creativity and injury resilience.

As some neural pathways are reinforced and others are neglected, the human brain finishes its initial wiring stage of tuning and pruning neural networks at about 25 years of age. It is affected along the way by barriers to brain development via family dysfunction such as abuse and neglect, catastrophic external events, and cultural barriers such as poverty and stigma. With concern and compassion, Barrett emphasizes that our brains do not develop on an equal playing field, and the mental stress they suffer causes multiple kinds of physical, intellectual and emotional deterioration.

Returning to the subject of how our brain’s purpose is to accurately react to predictors, the book zeros in on the role of memory in this process. Barrett describes memory’s function as the basis for effective prediction although it can have difficulty telling fact from fiction and, therefore, trigger dangerous decision-making. She explains the crucial difference between physical and social reality, positing that creating a society that succeeds in serving the needs of everyone involves brains that can: be creative, communicate effectively, reliably copy one another, cooperate, and compress and process data efficiently.

To promote brain health, she encourages us to value strong social connections, reduce chronic stress, take responsibility for our behavior, create a social reality that is healthy for us all, and care more effectively for our physical environment. Although this book deals with complex theories, it is full of fascinating examples, anecdotes and metaphors to illustrate the material whose weightiness is leavened by Barrett’s wit sprinkled liberally throughout the text. As a welcome surprise, Seven and a Half Lessons is part self-help book on how to manage our own quirky brains and part manifesto on how to move forward to heal this country’s political divisions.