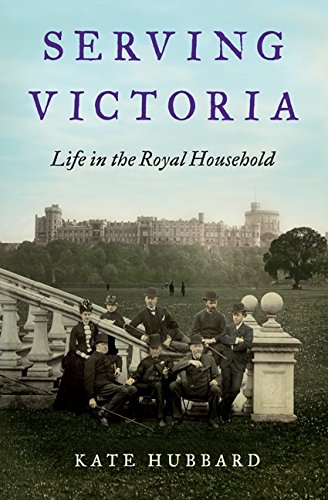 “. . . an important record of Victoria’s domestic and international influence, dazzling in its detail.”

In the visual arts, there’s a concept called “negative space,” in which the area surrounding a subject presents its own interest and helps define the subject.

Kate Hubbard tells us about Queen Victoria in just this manner: recounting the monarch’s six-decade reign through the eyes of her courtiers.

Well, not all of them: There were too many to include in a book one can hold in one’s hand. So she narrows it down to six primary members of the Queen’s household: “Sarah Lyttelton, lady of the bedchamber and then superintendent of the royal nursery; Charlotte Canning, lady of the bedchamber; Mary Ponsonby, maid-of-honour; Henry Ponsonby, private secretary; Randall Davidson, domestic chaplain; and James Reid, physician-in-ordinary.”

These appellations give a hint of what is to come: hundreds of pages filled with titles, roles, and vocabulary nigh incomprehensible—indeed, sometimes silly sounding—to contemporary Americans.

Even our wealthiest citizens don’t call their servants ladies- and lords-in-waiting, equerries, keeper of the privy purse, yeomen of the kitchen, lord chamberlain—and the book, originally published in England, does little to enlighten us on their meaning.

Similarly, American readers not well versed in British and European history and aristocracy may find their eyes crossing as name after name and title after title and issue after issue roll by with no explanation.

In some ways, though, excess is the point of Serving Victoria. The royal household was a massive enterprise, and this scholarly book examines its logistics and relationships in detail. Even the half-dozen servants Ms. Hubbard focuses on had to interact with multitudes of others high and low, many of whom came and went in rotation. All were beholden to one dominant personality, whose will defined the character of a nation.

We see the queen through the letters and diaries of Ms. Hubbard’s chosen six, stitched together by her narrative. She peels back the glamour of royal life to reveal both the humanity and drudgery underneath.

The book reads like a novel for long stretches, drawing one along in fascination. Readers with good memories will fare better than those without, owing to the name and title overload mentioned above. But even if you can’t hang on to the particulars, the scope of excess and complexity will sink in.

Most memorable are the rigors and the boredom. Not from the text, but from its description of life in service to the monarch. The 1800s were a time of rough living, especially in an ancient castle before central heating and plumbing. Although royal service paid spectacularly well compared to other occupations, daily life was often cold, wet, dusty, dirty, strained, contrived, dangerous, and dull—for hours well beyond the workweek we’re accustomed to today.

The luxuries one expects in a royal household were there, in their own mind-boggling abundance. But medical care, for instance, was terrible, and personal freedom about nil. The lack of electricity and internal combustion engines meant that most tasks were performed by hand; hence the army of people needed to perform them, under grueling conditions.

The queen was as vulnerable as her subjects to misery, but unlike them she could control it. More compassionate than other monarchs, she was still a tough boss; and, from living most of her life in isolation, she developed personality quirks and emotional imbalance that overruled anyone else’s sense.

Yet she wasn’t crazy, as other monarchs in all countries have been before and after her. Nonetheless, a person had to completely subsume one’s self to duty in order to endure in her court.

The book’s long, dense paragraphs are broken up periodically by photos and illustrations of the day. More would be welcome, along with a glossary or cast of characters. Lacking these, Serving Victoria remains an interesting and comprehensive encapsulation of history, properly equipped with endnotes, bibliography, and index.

Queen Victoria was a key player on the world chessboard, and understanding her as a person as well as a political force goes a long way in understanding the era she ruled. Ms. Hubbard’s book provides an important record of Victoria’s domestic and international influence, dazzling in its detail.