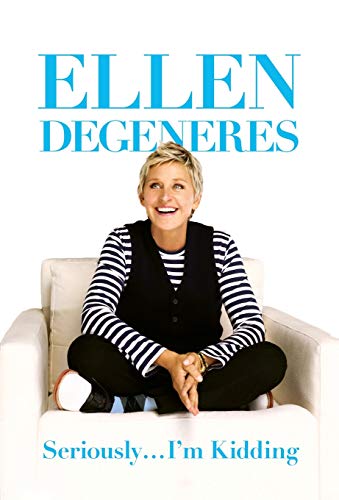 “What we have here is a collection of vaguely amusing errata corralled together with the slightest of lassos, a book with all the organizational clarity of a stand-up act. . . . To read Seriously . . . I’m Kidding is to hear Ellen DeGeneres yammering into your ear, which is either a very good or very bad thing, depending upon your enjoyment of yammering.”

Strangely, any consideration of Ellen DeGeneres’ newest book, Seriously . . . I’m Kidding, draws the reader back to the 1990s, era of the Clinton administration and of Ms. DeGeneres’ own groundbreaking sitcom, “Ellen.”

For instance, just how bad the reader thinks this new book—Ms. DeGeneres’ third—is largely depends what his or her definition of is is. And the material that makes up the backbone of the book—the jokes, if you will—seems to date from golden time a whole generation ago as well. The sentences seem as familiar as Goodnight, Moon, the wince-inducing punch lines as often heard. It is almost as if Robin Williams had put together a slim volume containing only “Nanoo nanoo”—over and over again.

What we have here is a collection of vaguely amusing errata corralled together with the slightest of lassos, a book with all the organizational clarity of a stand-up act. Indeed, the chief aspect of success that may be subscribed to this book is that the author’s words on the page read more or less exactly the same as her words sound when coming from her mouth on her daytime talk show. The result is the same hurdy-gurdy of hems, haws, and jabbing punch lines that we have by now become perhaps overly familiar with.

To read Seriously . . . I’m Kidding is to hear Ellen DeGeneres yammering into your ear, which is either a very good or very bad thing, depending upon your enjoyment of yammering.

Unlike comic Steve Martin, author of the novels Shopgirl and An Object of Beauty, as well as the excellent and surprisingly dour memoir Born Standing Up—all works in which Martin stretched himself as an artist by attempting to work with new material in new genres, or by sharing his own life story with deep candor—Ms. DeGeneres seems satisfied with merely continuing to enhance her brand by giving her audience exactly what they have come to expect from her: hemming, hawing, and the jabbing punchline.

Along the way, she also manages to occasionally recreate the moment, on the cover of a national magazine, in which she announced, “Yep, I’m Gay.” In her new book she does this by mentioning from time to time that she is married to actress Portia de Rossi, but only in order to write an anecdote with an expected “I Love Lucy” spin:

“Portia recently decided to learn something new. She taught herself how to cook. She didn’t take any lessons or classes or anything. She just figured it out on her own. And I know what you’re thinking—uh oh. But she’s really good at it. Cooking isn’t an easy skill to learn. It can be very dangerous. There’s fire, there’s steam, there are sharp, sharp knives. Portia is down to three fingers, but she never gave up and that’s why I love her.”

You can almost hear the drums coming up in the background as the image of Portia in the kitchen, chopping away with a bandaged hand, cross-fades to the heart and the closing credits.

Those wondering the why and how of this new book, why, after to bestsellers in exactly the same vein with frighteningly similar titles (My Point . . . And I Do Have One, and The Funny Thing Is . . . , the two of which, taken together with the latest, Seriously . . . I’m Kidding, suggest that if nothing else, Ms. DeGeneres enjoys a good ellipsis. How, with all she has to do in a day, does she find time even for this? Her own explanation:

“Over the last year or so since I decided to write this book, people have been asking me how I have the time and why I chose to write it. The truth is, last June I was driving through a tunnel while I was on the phone with my agent and my cell service was spotty. I said, ‘I just go a great IKEA table for my breakfast nook.’ My agent thought I said, ‘I’ve got a great idea for my newest book.’

“By the time we figured out our hilarious misunderstanding I had signed a whole bunch of papers (who has time to read all those words?!) and I was under contract to write a book. Similarly, a few years ago, I told my agent, ‘I think I got some fudge on my lapel,’ and he thought I said, ‘I want to be a judge on “American Idol.”’ Since then I got a new phone. And I found out my agent’s name is Marvin, not Blarvin.’”

A quick circumnavigation of the book and its contents reveals how very close to the bottom of the barrel Ms. DeGeneres has come. A chapter entitled The Secret of Life—Part One contains but one word: kale. (The reader assumes that his mirthful response is to fill up the rest of the page.) This yields to a chapter called What Would Jesus Do? (“I actually think that if Jesus were alive today, there would be polls about him in Us Weekly. ‘Who wore this flowy gown better? Jesus or J. Lo?’”), which itself morphs into a chapter called Meditation, which contains four blank pages, followed by the words, “Ahhhhh. Doesn’t that feel better.”

Even worse, in terms of wasting paper, is the chapter For the Children—Part One, which contains full page line drawings of a toaster, a coffeemaker, a file cabinet and an exercise bike—all of which are supposedly designed to be a brief coloring book for the reader or his or her children. (The reader suspects otherwise, however, and believes that Ms. DeGeneres is so bereft of actual material, good or bad, new or old, that she has been forced instead to fill the pages of this book however she might.)

As Ms. DeGeneres herself puts it, when describing the backstage life at her television talk show: “After I talk to the audience, we take a commercial break, and during the break, I talk to my producers. They tell me stuff like, ‘You look great’ and ‘You were so funny when you said [INSERT HILARIOUS JOKE HERE].’”

If she is going to write a book that in no way enhances her career as a talented, intelligent humorist, then she should at least bother to hire some writers to do just that: insert hilarious jokes throughout the manuscript.

As it is, Seriously . . . I’m Kidding in no way seems to satisfy either the reader as participant in this folly, or, indeed, even the dictionary meaning of the word “book” itself, except perhaps the most basic one: “A written or printed work consisting of pages glued or sewn together along one side and bound in covers.” Glue? Check. Pages? Check. Print? Check.

As long as we, her readers, don’t get too picky about the contents, it appears that Ms. DeGeneres may carry on with her bestselling career as an author of books.