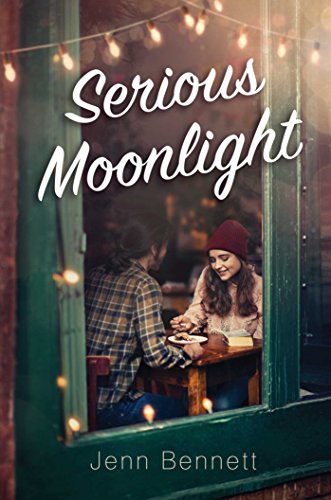 This novel is obviously aimed at a female young-adult audience. If you do not number among this group, the book probably isn’t for you. If you are still a teen, or you remember those days with fondness and want to revisit their angst, you will likely savor the complex romance between 18-year-old Birdie and 19-year-old Daniel.

Birdie is an insecure, introverted dreamer with narcolepsy who was raised and schooled in near isolation by her grandparents. Daniel is an outgoing, self-proclaimed nerd with depression who lives with his family in a cohousing community.

While Birdie loves mystery novels, Daniel loves fantasy games and magic tricks. Both, however, have shadowed pasts they try to conceal from each other, even as they struggle to resist a compelling mutual attraction.

Neutral ground is the Moonlight Diner where they first meet, and later the hotel where they both work night shift. The hotel presents them with an intrigue they can explore together: a bestselling author, famous for his insistence upon anonymity, has been renting a room for exactly one hour per week, arriving and departing in disguise. Birdie and Daniel take it upon themselves to find out why, and in the process be the first members of the public to learn what the mysterious man looks like.

But it proves to be more complicated than that. Of course.

While they dig into the mystery, suffering many reversals in their relationship, readers are treated to highlights of Seattle, Washington, and its adjunct, Bainbridge Island, in the Puget Sound. Readers also get colorful descriptions of the story’s colorful characters. These combine to give the book a cozy-mystery feel, but the love affair dominates. Perhaps we could call it a cozy romance, or a romantic cozy.

Regardless, the story is contemporary in time and tone. Threads of political correctness, psychological today-ness, and urban mores are woven through, which might alienate some older or rural readers, as might Birdie’s self-centeredness and immaturity. These aspects won’t trouble other readers, if they even notice them, and don’t interfere with the story. More, they contribute to its overall flavor.

That flavor is warm and upbeat and lovingly human. It leads to a predictable outcome appropriate for the book’s mixed-genre quality. Given that’s what readers will desire and expect, Serious Moonlight succeeds in its story mission.

(P.S.: For those of you who see the title and immediately start singing “. . . under the moonlight, this serious moonlight” from David Bowie’s “Let’s Dance”—yes, there’s a link to that in the story.)