Serial Killers: The Minds, Methods, and Mayhem of History's Most Notorious Murderers 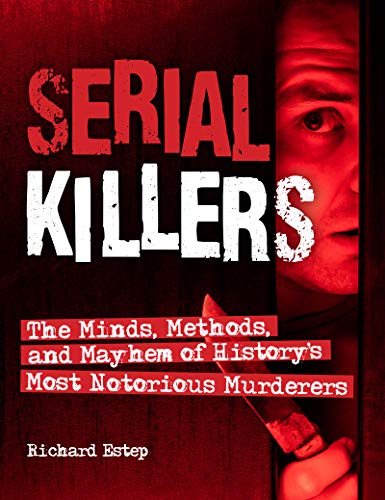 “sure to find itself on the bookshelves of any self-respecting true crime junkie, and it is the perfect gateway drug for anyone just beginning their journey down the dark and hoary path of serial killer culture.”

Thanks to the internet, the true crime genre has exploded in popularity. Books, movies, television shows, and a litany of podcasts dedicated to true crime have exploded since 2010. Serial killers, or those human monsters who patiently stalk their victims before brutalizing them in the most horrific ways imaginable, are often the most discussed and analyzed criminals in the true crime milieu. Author Richard Estep’s Serial Killers: The Minds, Methods, and Mayhem of History’s Most Notorious Murderers is another addition to this growing corpus of blood-drenched entertainment.

Estep, a specialist in books about the paranormal, takes the encyclopedic approach to his topic in this book. Indeed, Serial Killers is more of a reference guide than a cohesive book with a single theme or thesis. In 400 pages, Estep details the lives and crimes of some of the most infamous murderers, including Richard Ramirez (“The Night Stalker”), Ted Bundy, Jeffrey Dahmer, and Aileen Wuornos. Lesser-known serial killers are covered as well, such as the Japanese “vampire killer” Tsutomu Miyazaki and the “Acid Bath Murderer” John George Haigh. The final chapters in the book eschew serial killers altogether and focus on the modern scourge of mass murderers and spree killers like James Holmes, the mentally disturbed graduate student who shot moviegoers in Aurora, Colorado, on July 20, 2012. Estep makes the point that these killers share the same misanthropic motivations as the serial killers of the 1970s and 1980s. The only difference is in methodology.

Overall, Serial Killers is neither a groundbreaking text nor a major addition to the true crime canon. Instead, it is an excellent primer and reference guide for those interested in the macabre subject. Estep follows a familiar pattern with each entry: he begins the story in media res, includes biographical details, especially those oh-so important details about the early lives of the killers, and concludes by discussing how the killers were caught and found guilty of their crimes. This not totally uniform, as not all of the profiled killers were caught (see: The Zodiac) or even existed (see: The Sawney Bean Cannibal Clan).

Still, the one overarching theme in Serial Killers is the never-ending debate over nature versus nurture. Most of the serial killers chronicled here suffered indignities as children. Most were abused by a family member. Some were molested by strangers. One was forced to undergo a circumcision in order to curb one particular habit. But contrary to standard form, some serial killers did not suffer abuse or belittlement as children. Serial Killers makes no attempt to put the debate to bed, and it is not in the industry of providing answers for nervous readers.

Serial Killers is an extensive catalog of crimes by a populist writer of some skill. It is sure to find itself on the bookshelves of any self-respecting true crime junkie, and it is the perfect gateway drug for anyone just beginning their journey down the dark and hoary path of serial killer culture.