The Serial Killer Whisperer: How One Man’s Tragedy Helped Unlock the Deadliest Secrets of the World’s Most Terrifying Killers 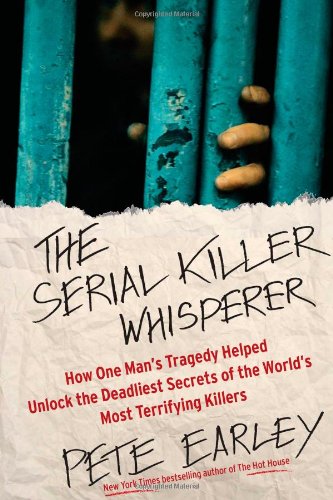 “A young boy with a brain injury has not only found a purpose in his life, but he is also able to help others in the process. . . . Mr. Earley resists the temptation to either moralize or sensationalize the killers or tout himself as an armchair psychologist. Without commentary on the brutality of the heinous crimes committed, the story speaks for itself. In brilliant journalistic fashion, the author recounts the horrific details and brutality of the crimes with complete objectivity. Each excerpt and word appears to have been carefully considered to accurately depict the tale of interwoven lives and the methodology that develops a complex criminal puzzle and follows it through to its completion. . . . no one can soon forget the characters in this honest, true crime portrayal.”

“On the first day of school, it didn’t go well. The kid behind me kept making fun of my shoes because they were hand-me-downs. The class was laughing so I turned around and stuck my pencil through his hand.”
—Serial killer Glen Rogers—aka the Cross Country Killer who bragged about murdering 70 women

“I remember every one of them and every detail with each one. Why did I use my bare hands? To feel life slipping away and then release your grip and bring them back. Ah, that is a feeling. So powerful, so real.”
—Arthur Shawcross—aka The Genesee River Killer who confessed to 11 murders

Both of the above quotes are but tiny slivers of excerpts from the hundreds of personal letters written by a variety of the most lethal serial killers in the U.S. to a young man named Tony Ciaglia. From their “tomb of finality” (a serial killer’s death row cell), these infamous predators share the most intimate and graphic details of their lives and their “kills.” Arthur Shawcross (referenced above) for example, admits fairly early on in his correspondence to Tony that he enjoyed cannibalizing the genitalia of his female victims.

Most of the serial killers delineated in The Serial Killer Whisperer “hunted” by night in the shroud of darkness as a deer hunter might stalk his prey. The reader can only imagine from the detailed descriptions of these crimes, the horror and agony each of the human victims experienced while they were being bound, beaten, choked, raped, shot, and/or tortured.

For some, death may have been a release that ended their unspeakable pain, the utter horror of it all. Others scratched, screamed, and fought back with all their strength until their inevitable last gasp. But very few escaped with their lives. Never again could they return to the life they had known before being captured in the clutches of their worst imaginings: the human killing machine that is a serial killer.

But what prompted these highly unusual communiqués between some of the most notorious serial killers and the young Tony Ciaglia? The reader gets an immediate sense that this true story is much more complex than meets the eye.

These letters are the fulcrum that changes the lives of Tony and his entire family. What begins as a pen-pal relationship for a troubled young Tony searching for meaning and purpose in his life, ultimately helps Tony become a person who feels useful, aiding the police in the recovery of missing victims and ultimately enabling some of the victims’ families to have closure.

On what appeared to be a great day for a delightful jaunt at a teenage camp retreat, Tony was struck in the head by a jet ski. During the ride on the rescue helicopter, Tony’s heart stopped on three occasions. The damage to his brain seemed irreparable, and the ensuing months were agony for his entire family knowing that he might not survive—or able to talk or walk again if he did.

While Tony was in a coma, his mom Chris thanked one of the nurses on the ward of the hospital for their prayers. The nurse replied, “Oh I’m not praying for him to wake up, I’m praying for God to take him. I’ve seen what happens when people with brain injuries this severe survive. You don’t want that.”

After regaining full use of his motor skills, doctors determined that the part of the brain that governs cognitive functioning was severely compromised. As a result of the damage, Tony’s emotions could range from contentment to rage or suicidal in a matter of minutes. Even with medication, his behavior remained unstable.

Unable to control his outbursts, Tony found that his friends abandoned him; he felt isolated and alone. Lost and adrift, feeling hopeless, he mentioned an interest in writing to his psychiatrist. This was the beginning of his search for meaning in his chaotic world.

While surfing the Internet, Tony found a website that sold crime memorabilia which soon became a fascination for him. After compiling a list of serial killers he could write to, his journey began along a path to some of the most dangerous among us, which eventually led him to question his own sanity. He was not judgmental of them but was simply curious and looking for a friend.

Tony shared the story of his brain injury, and after mailing out 29 letters received 20 responses. Amazingly, his parents were very supportive of his endeavors simply because he was developing an interest that gave him a reason to get up in the morning. And with their support, Tony shared each detail of the letters with his family. He did not react negatively when the killers shared their fantasies about sex or anything else. His family, too, got involved in every aspect of the process.

Letters progress to the installation of a private “murder line” so that he can speak to the killers by phone. Visits to various penitentiaries ensue with Tony’s father as chaperone. As Tony grows older and more sophisticated, he realizes he can help the police uncover murder victims from cold cases—even provide information on killings of which they were unaware. Tony chronicles every detail: names, locations, descriptions, etc. that would prove crucial to closing several cases.

A young boy with a brain injury has not only found a purpose in his life, but he is also able to help others in the process.

There are many aspects of The Serial Killer Whisperer that make it unique in the true crime genre and as a biography. Author Pete Earley is a talented conduit of this true portrayal of an unlikely and unconventional kinship between lost souls and the frailties of the human psyche.

Mr. Earley resists the temptation to either moralize or sensationalize the killers or tout himself as an armchair psychologist. Without commentary on the brutality of the heinous crimes committed, the story speaks for itself. In brilliant journalistic fashion, the author recounts the horrific details and brutality of the crimes with complete objectivity. Each excerpt and word appears to have been carefully considered to accurately depict the tale of interwoven lives and the methodology that develops a complex criminal puzzle and follows it through to its completion.

The Serial Killer Whisperer is definitely not for the faint of heart. But readers who are fascinated with this subject matter, particularly true crime aficionados, will be mesmerized by the contents and implications of this book. In the end, many will still be unbearably moved by the grisly nature of the murders and the magnitude of cruelty that comprises the lethal nature of a serial killer. But no one can soon forget the characters in this honest, true crime portrayal.