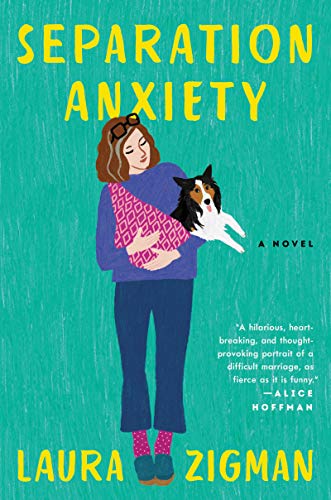 “Zigman is an excellent writer who knows how to keep all the balls in the air. When the performance stops, the reader comes away admiring the artistry and recommending this quirky book to friends.”

There are book covers and book covers, some that seemingly have nothing to do with the novel at hand and some just so perfect, you’d think the writer designed the cover herself.

Writer Laura Zigman did not design the cover of her new novel Separation Anxiety, but she might as well have. It’s that perfect, depicting a woman in clogs and comfortable socks wearing her dog in a baby sling. It’s an arresting image for a contemporary story whose central figure is a woman and mother who has lost her way. She’s gone nowhere, but her world of domestic bliss has changed around her into something unrecognizable.

Why has Judy, the heroine of this novel, taken to wearing her mini-sheltie in a baby sling? Well, let’s see. She’s 50 years old, has a teenage son who is pulling away, and a distant husband who sleeps in a separate bedroom (dubbed the “snoring room” so their 13-year-old son supposedly doesn’t realize his parents are separated). As if that’s not enough, said husband is addicted to pot and the couple earn so little—what with the son’s private school—that Judy and husband Gary cannot afford to sell the house and separate.

Judy’s present is so upsetting that she’s nostalgic for Eggo waffles and LEGOs littering the floor.

Zigman in the voice of Judy explains: “It’s hard for me to believe those moments ever happened, that I was ever in the middle of all that love, and time, and possibility, and that now I’m not. Life eventually takes away everyone and everything we love and leaves us bereft. Is that its sad lesson? That’s the only explanation I have for why I now wear the dog; my version of magical thinking: little tiny cracks are forming inside me every day and only the dog is keeping me from coming apart completely.”

Zigman admits in the publicity accompanying this book that her writing is semi-autobiographical, and it’s easy to see her as her main character. Judy was once a successful writer whose career has settled into a very long lull, not unlike Zigman herself who 22 years ago published the national bestseller Animal Husbandry.

But the years don’t matter at all because Zigman still has her fastball. This novel is full of zingers and funny situations like the person pooping in the hallways of Judy’s son’s private school. And then there are the People Puppets. In order to keep their son at his private school when money is tight, Judy and Gary agree to temporarily feed and shelter two humans who call themselves the People Puppets.

They are essentially humans who wear sheets and papier mache heads. They are a couple who almost never break character, not even in Judy and Gary’s home; the woman calls herself Phoebe the Zebra, and her husband is Nick the Llama.

It’s a bit awkward at first, but it turns out that Gary and Nick have a lot in common. Both went to law school but never wanted to be lawyers, and they share a fondness for marijuana. Miraculously, as sometimes happen, Judy and Gary begin getting along better with each other when they begin sharing their home with these People Puppets. One reason that might be is because Judy and Gary rediscover a closeness they had lost once they start sleeping together again. The puppets, you see, take over the snoring room, forcing Gary out.

As you can tell, there is a lot of story here and though it might sound a bit ridiculous, it all works in a very satisfying way. Zigman is an excellent writer who knows how to keep all the balls in the air. When the performance stops, the reader comes away admiring the artistry and recommending this quirky book to friends.