Separate and Unequal: The Kerner Commission and the Unraveling of American Liberalism 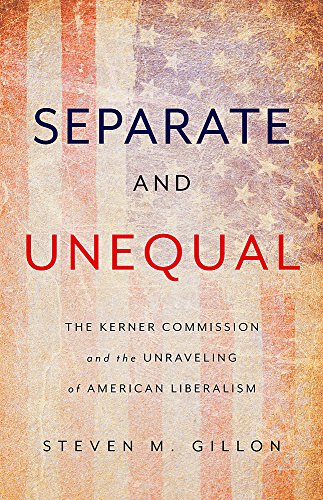 Usually a work of nonfiction on the topic of a presidential commission is described as scholarly with a dash of dry. Such is not the case with Separate and Unequal: The Kerner Commission and the Unraveling of American Liberalism. This book is boldly written. It travels the troubled social and political path of the United States for the past 50 years with clarity and striking insight. It explains how the United States dissolved from organized programs of the Great Society of President Lyndon B. Johnson to the Make America Great Again unfettered tweets of President Donald Trump. The journey is not for the faint of heart.

Separate and Unequal is published on the 50th anniversary of the report of the National Advisory Commission on Civil Disorders created by President Johnson. Commonly known as the Kerner Commission, the body was created by President Johnson presumably to objectively examine why America had exploded in violent urban riots in 1967 and the preceding years. The publicly stated noble charge of the Commission was to determine what had happened in the riots, determine why they had occurred and propose actions to prevent the vicious riots from ever happening again.

As author Steven M. Gillon discloses, the commission was formed as a politically expedient move by President Johnson, underfunded and ultimately defunded, and completely lacking the support of the Washington power structure.

Nonetheless, the Kerner Commission more than fulfilled its charge. Its investigative work was dynamic. The report it prepared defiantly answered the questions posed and presaged the crisis of decency and social disunion of 2018.

Gillon systematically details how the commission was hobbled by President Johnson from its inception. In the mind of President Johnson, its actual task was not the search for the truth and creation of solutions to avoid violence, but rather to praise him for his creation of the Great Society and absolve him of personal blame for the riots.

To modify a recent phrase, the commission report outlined many uncomfortable truths about America in the 1960s. Not surprisingly they were the usual suspects. They included poverty, lack of jobs, strident defacto segregation, lack of neighborhood infrastructure, and oh, yes, white racism.

A surprising finding by the Commission was that riot participants were most directly motivated by having personally observed or having been the direct object of police abuse. This is a telling presage of police abuse, violence, and the resulting rise of Black Lives Matter. According to research released by Boston University School of Public Health in 2018, unarmed black people are more likely to be shot and killed by police than unarmed white people.

The commission recommended solutions that would have required time, work, education, and most all federally funded programs. Programs of the Great Society were not praised by the report. Personally insulted by the entire Commission report, President Johnson would have none of it. He was pursued by the growing political demons of Vietnam protests, the election of more law and order Republicans to Congress, and cries for fiscal restraint.

The report of the Kerner Commission was issued in March 1968. That month, President Johnson, the principal architect of the Great Society, announced he would not seek reelection. The next month, Martin Luther King, Jr. was brutally murdered. The nation’s urban centers erupted in riots and flames. Robert F. Kennedy was murdered in June, 1968. The Democratic National Convention in August 1968 provided more televised chaos. The Vietnam war continued its deadly stalemate.

The swell of events pushed the country far to the right. The Kerner Commission report as an action plan and lesson learned was forgotten.

The hard lesson learned and recorded by the Kerner Commission was its crowning statement that America was fast becoming a nation separate and unequal. The hard lesson being driven home by Gillon is that race relations and preservation of social decency are extraordinarily complex problems. They lack simple and immediate reconciliation. The conundrum has only grown since the Kerner Commission.

The Kerner Commission was ideologically fractured. It could not agree on a working definition of the term riot. It downplayed some if its own salient findings, not the least of which was that blacks of the time had moved away from the NAACP ideal of integration to the more direct goal of economic fairness for their own communities.

Separate and Unequal faithfully addresses these facts. The last living member of the Kerner Commission, former U.S. Senator Fred Harris, has lamented in his new report “Our Divided Society” and elsewhere that the more things have changed, the more they remain the same. He states that he is saddened that in 50 years we’re all still talking about the same issues.

Separate and Unequal devotes a last few pages to the straightjacket of facts that the Trump campaign and his administration has stoked the coals of 50 years of white resentment to win elections and have its way with the world. But there the book stops. It is as if Gillon could not decide the path forward either to serve as an excellent political historian or give full voice to a better future.