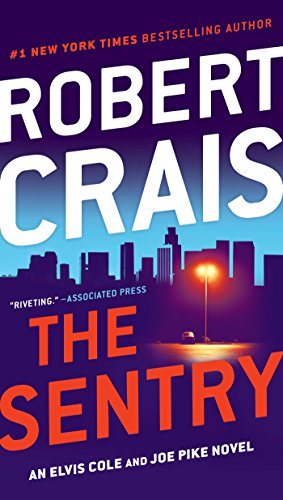 Robert Crais is the author of the bestselling Elvis Cole/Joe Pike novels, and is the recipient of numerous awards. He has written scripts for such major television series such as “Hill Street Blues,” “Cagney & Lacey,” and “Miami Vice.” His book, Hostage, was named a Notable Book of the Year by the New York Times and was a worldwide bestseller. A film adaptation of Hostage was released, starring Bruce Willis as ex-LAPD SWAT negotiator Jeff Talley. Despite all these accolades, Crais is best known for his excellent and wholly compulsive Elvis Cole/Joe Pike novels, where each character alternates as the leading star. In The Sentry, it’s Pike’s turn for the limelight.

Dru Rayne and her uncle Wilson are former Louisiana refugees who have relocated to Los Angeles after the devastating impact of Hurricane Katrina. Now, five years after the hurricane, their struggling restaurant faces a different danger: extortionists putting the heavy on them for their hard-earned cash.

Stopping to put air into a tire of his jeep, Joe witnesses Wilson being beaten by thugs, and he duly offers Dru and her uncle his own unique brand of Pike-Protection for free. Puzzlingly, neither of them wants his help—and likewise the shadowy federal agents seemingly watching the mysterious couple. Nothing is ever what it seems. Fortunately for Dru, Joe has fallen hard for her, and he intends to provide his help, whether she wants it or not.

It’s not too long before our dynamic duo soon discovers that nothing about Dru or Wilson adds up. In fact, it soon emerges that everything Pike thought he knew about them, their relationship to the gang, and the reasons they fled New Orleans have been lies, and the beautiful Dru may not be the total innocent she claims to be. To complicate the situation even further, a vengeful and murderous force from Dru’s past is catching up with her, pitting Pike and Cole against the combined forces of South American crime lords, rogue federal agents, and contract assassins—all on the bloody hunt for $12 million in missing stolen cash. It’s all just a matter of time before dead bodies start getting in the way. . . .

Reading a Robert Crais hard-boiled novel is always a cinematic experience, and The Sentry follows that tradition seamlessly with a compelling list of zany characters all depicted with wonderful vividness. The dialogue is bullet-fast, witty, and never flags, culminating in a page-turning story both riveting and original.

If this is your first Crais novel, be prepared for addiction in the company of Joe Pike and Elvis Cole. It really doesn’t get much better in meaty thrillers than this.