The Sense of an Ending (Movie Tie-In) (Vintage International) 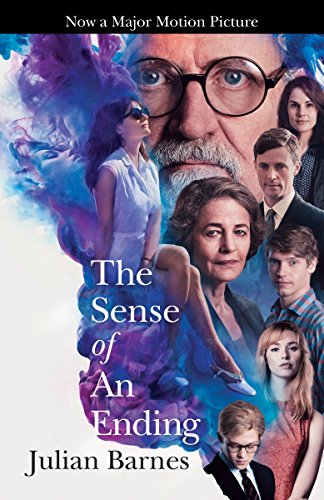 “The Sense of an Ending is something of a minor masterpiece.”

With its release pushed forward off the back of the publicity surrounding its short-listing for the Booker Prize—the U.K.’s premier fiction award, the winner of which will be announced on October 18, 2011—Julian Barnes’ new novel, The Sense of an Ending is something of a minor masterpiece.

Few would bet against Mr. Barnes carrying off yet another prize to add to a burgeoning list which includes the Somerset Maugham Award, the Geoffrey Faber Memorial Prize, and the E. M. Forster Award from the American Academy of Arts and Letters.

For this is an iceberg of a novel, managing the feat of being concisely written and yet rich and full of emotional depth. Because of its length (weighing in at 176 pages, The Sense of an Ending treads the middle ground between long novella and short novel), it has drawn immediate comparison with Ian McEwan’s On Chesil Beach. Only author Barnes’ work is far more satisfying (there’s a pun in there somewhere, if you know the subject matter of On Chesil Beach.)

Mr. Barnes seems to be alone among his British heavyweight writing contemporaries in getting better with age. As Martin Amis struggles to recapture the seething energy of his early works and McEwan tries in vain to write the Great British Novel, Mr. Barnes quietly and effectively gets on with his job. The Sense of an Ending appears a quiet and yet effective work. And yet scratch the surface and there’s a great deal more at stake.

The protagonist of the novel is Tony Webster, an old man looking back on his life, trying to come to terms with the truth of it. He’s prompted into a rapid reanalysis of all of his previously unshakeable ideas about his character upon receiving a letter he wrote many years ago, in a fit of pique. The letter reveals a dark side in him that he scarcely recognizes:

“I reread this letter several times. I could scarcely deny its authorship or its ugliness. All I could plead was that I had been its author then, but was not its author now. Indeed, I didn’t recognize that part of myself from which the letter came. But perhaps this was simply further self-deception.”

And: “My younger self had come back to shock my older self with what that self had been, or was, or was sometimes capable of being.”

The letter immediately inspires guilt in Tony, but also remorse too, in the truest sense of the word, as in: “a feeling which is more complicated, curdled and primeval. Whose chief characteristic is that nothing can be done about it: too much time has passed, too much damage has been done, for amends to be made.”

The narrative of Tony’s early life resembles The History Boys, Alan Bennett’s celebrated play. It is, at times, side-splittingly funny, at others, brutally honest, but always delightfully well observed. He remembers:

“In those days, we imagined ourselves as being kept in some kind of holding pen, waiting to be released into our lives—and when that moment came, our lives—and time itself—would speed up. How were we to know that our lives had in any case begun, that some advantage had already been gained, some damage already inflicted? Also, that our release would only be into a larger holding pen, whose boundaries would be at first indiscernible.”

Tony quest is to discover “psychological, emotional and social truth” somewhere between history, with its “authentic documents,” “witnesses,” and “essential corroboration,” and his story, his visceral memories. But the vagaries of time act to cloud the issue:

“We live in time, it bounds us and defines us, and time is supposed to measure history, isn’t it? But if we can’t understand time, can’t grasp its mysteries of pace and progress, what chance do we have with history—even our own small, personal, largely undocumented piece of it?”

The novel plays on these boundaries between personal and collective history. Although it is primarily written in a breezy, comic style, it comes packed with existential, Blakean musings on the crossing-points between youth and age, innocence and experience: “It strikes me that this may be one of the differences between youth and age: when we are young, we invent different futures for ourselves; when we are old, we invent different pasts for others.”

Time enters the novel in myriad ways. “There is objective time, but also subjective time, the kind you wear on the inside of your wrist, next to where the pulse lies. And this is personal time, which is the true time, is measured in your relationship to memory.” And: “If you’ll excuse a brief history lesson: most people didn’t experience “the sixties” until the seventies. Which meant, logically, that most people in the sixties were still experiencing the fifties—or, in my case, bits of both decades side by side. Which made things rather confusing.”

The Sense of an Ending is a rewarding reading experience for many reasons, but ultimately, the reason it is such a dazzling success is the startling emotional honesty of it. The desire to live life to the fullest is infectious. Mr. Barnes plays with the maxim that it’s better to regret the things you have done than the things you haven’t, and thus rages against living life complacently.

“We thought we were being mature when we were only being safe. We imagined we were being responsible but were only being cowardly. What we called realism turned out to be a way of avoiding things, rather than facing them. Time . . . give us enough time and our best-supported decisions will seem wobbly, our certainties whimsical . . .”

And: “I found myself in revolt against my own . . . what? Conventionality, lack of imagination, expectation of disappointment?”

The Sense of an Ending, fittingly, deals with grave existential questions, specifically those that center on the suicide of Adrian Finn, Tony’s best friend from school.

“’He took his own life’ is the phrase; but Adrian also took charge of his own life, he took command of it, he took it in his hands—and then out of them. How few of us—we that remain—can say that we have done the same? We muddle along, we let life happen to us, we gradually build up a store of memories.”

Ironically, despite focusing on endings, and on suicide, this is a tremendously life-affirming work. It’s highly original as well. And complicated, just like life. Because after all life “doesn’t like being typecast . . . life’s much more complicated than that.”