Semicolon: The Past, Present, and Future of a Misunderstood Mark 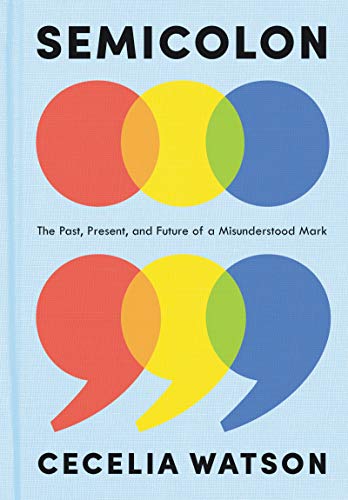 Semicolon is a charming book. Cecelia Watson takes on “the most feared punctuation mark on earth” (cf. The Oatmeal) with a charm and enthusiasm that grammarians like Lynn Truss and Mary Norris reserve for the comma. (In her defense, Mary Norris has produced a delightful semicolon-focused video.) Watson, however, is less a grammarian than a historian of grammar, and Semicolon is less a writing guide than an exploration of a punctuational oddity’s evolution.

Watson’s history is unexpectedly engaging. The semicolon’s origins are clear and specific: Venice, 1494, and at the time the dot-on-a-comma marked an intermediate pause, something between a comma and a colon in length, and nothing more. (For added confusion, the semicolon was almost indistinguishable from the abbreviated Latin que, meaning and. Dots with their own identities abounded.) Thence did the semicolon function essentially however authors wanted it to. Its function only came into question when grammarians began creating “rules” for writing in English in the middle of the 18th century.

That creation is crucial to Watson’s thesis. The semicolon does not, she reminds us, have an inherent and original function. Grammarians of the 18th and 19th centuries created ever-more-rigorous strictures for punctuation (and sentence structure) as part of a process to render language “scientific” and suitable for children’s study.

These grammarians freely critiqued “the very worst syntactical offenders available in English at the time, true grammatical failures including Shakespeare, Donne, Pope, Swift, and Milton.” The project of this mode of grammar has little regard for it. It seeks to produce a language which can be learned simply as a series of rules, without complex knowledge of subtlety or personal style. This is both and neither descriptivism and prescriptivism, regulating as it does language beyond historical or modern regular usage. The semicolon must have rules, and so it shall.

The rules, once established, proceeded to induce chaos. Watson draws attention to two American legal cases, each of which turned entirely on the reading of a single semicolon. One is comic: the Boston “Semicolon Law” accidentally restricted the sale of liquor between 11 P.M. and 6 A.M., with consequences of public drunkenness and national amusement. The other instance is tragic: in the criminal case of Merra and Rannelli, a judge (perhaps deliberately) misconstrued a semicolon to sentence one of a pair of defendants to death, holding that the jury’s recommendation of life imprisonment applied only to one man, and not to both.

Watson’s contrast of grammatical laws and the legal system is an insightful one. Grammarians claim to provide clarity, but the law finds ambiguity in spite of this rigor. Punctuation may claim to guide justice, but the laws of one drive the laws of the other to be interpreted in terms of letter (or, more accurately, punctuation) rather than spirit.

Watson clearly values spirit over letter. The semicolon, she suggests, is far less restrictive than either ancient or modern rules suggest. Its beauty lies not in its strictures but its flexibility.

That flexibility frames the long, beautiful chapter “Semicolon Savants.” Rather than naming the possibilities, Watson allows them to play out in the work of 19th century and modern authors: Mark Twain, Raymond Chandler, Rebecca Solnit, Irvine Welsh, Herman Melville, Henry James, and Martin Luther King, Jr. Elegant and brutal passages reveal striking possibilities, even as those passages struggle to arrive in print. (Both Twain and Chandler waged ongoing battles with copyeditors seeking to re-punctuate their work.)

Watson does not ultimately put forward rules for the semicolon. She sets herself against rigorous “snoots” like David Foster Wallace, and ultimately against the idea of Standard Written English as an authoritative whole. She suggests that “we can peel away the justification that ‘rules are really in language’ and free ourselves to ask instead, ‘What good rules might be, even if they aren’t strictly necessary or sufficient?’” It’s an argument for deep knowledge and style awareness, moving beyond strictures to something educated, intuitive, and graceful.