Seek You: A Journey Through American Loneliness (Pantheon Graphic Library) 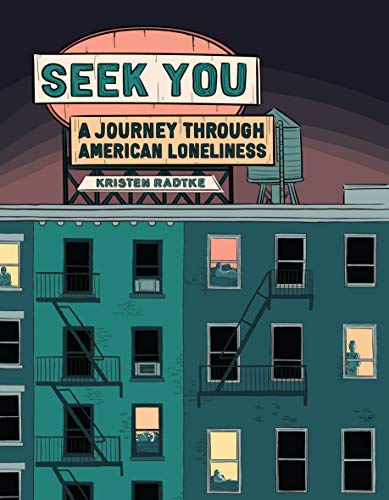 “A sterling example of how graphic novels are uniquely able to get readers through tough subjects.”

Kristen Radtke uses both words and images to powerful effect in this deep exploration of loneliness in all its facets. She brings in scientific experiments with isolation and deprivation on monkeys, critiques of social media and its impact on connections, loneliness crises hotlines, along with her personal experiences and observations on loneliness. Cultural standards of manliness created another kind of loneliness in the cowboy, the lone figure whose solitude is seen as a strength, a form of manly independence. As Radtke explains:

“This is the important part: it implies superiority, and only when a man is superior to others is his loneliness meaningful instead of pathetic.”

Women who are alone are, of course, pathetic, considered unlikeable, and undesirable rather than superior.

The book starts with a broad sense of what loneliness is:

“Loneliness is often exacerbated by a perception that one is lonely while everyone else is connected. It’s exaggerated by a sensation of being outside something that others seem to be in on. A family. A couple. A relationship. A joke.”

This outsider status, the feeling of being not only alone, but apart from everyone else, makes loneliness distinctive in its despair. In another definition, Radtke writes:

Radtke spirals like this, around the many different complections loneliness can take, never settling for easy answers.

The art is stunning, creating a Hopper-like effect of disaffected isolation. Even more amazing, Radtke is able to keep up the interest and intensity page by page, creating a kind of graphic documentary deep dive into loneliness. The art goes a long way to keeping our interest. Although her writing is strong, the book would definitely be less powerful without her brilliant use of imagery to expand on the text, to create mood and meaning. The art somehow keeps the book from becoming too depressing to bear, as a book on loneliness easily could be. Radtke has found the right balance and given a sterling example of how graphic novels are uniquely able to get readers through tough subjects.