Seeing the Sacred in Samsara: An Illustrated Guide to the Eighty-Four Mahasiddhas 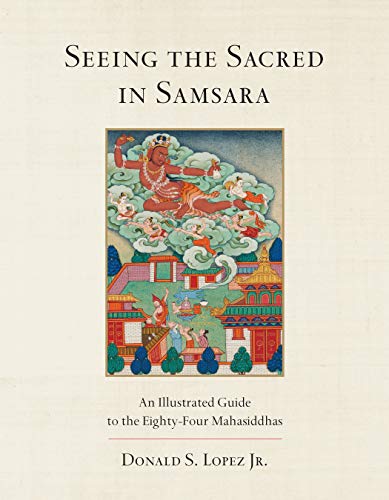 “Seeing the Sacred in Samsara is a wonder, a one-of-a-kind collection that fought the odds over tumultuous decades to come into being. Its very existence is a bit miraculous. It will serve as a timeless inspiration for all wisdom seekers . . .”

So often it is the spiritually ordained, the monks and nuns, who are thought to be able to reach a heightened religious experience by living separated from the ordinary mundane routine (samsara) of the rest of us. There is also, however, a different path, the path of the layman, that is capable of attaining enlightenment in the midst of worldly living.

In the Buddhist tradition, one group of these highly accomplished beings— whether monks or layman—are referred to as the mahasiddhas. Seeing the Sacred in Samsara contains a collection of rare illustrations of each of the 84 mahasiddhas and a description of their stories. The first story, though, is a fascinating tale of the origin of this unique collection, which was commissioned in the early 20th century by a minister in the government of the Thirteenth Dalai Lama.

Lopez goes to great length to explain the history, importance and relevance of this group of paintings, which represent inspirations of the tantric path to buddhahood, in order to establish the appropriate context. Readers get a crash course in Buddhist Tantra, The Siddhis (the “great accomplished ones”), Charnel Grounds (basically a dump for corpses), and Women in buddhism. There is a breakdown of the structure of the three primary plots of the mahasiddhas’ stories and a discussion on the original intended use of the paintings, which was to hang in a private temple honoring Vajradhara—the central source of wisdom teachings.

Based on the social position of the person who transformed into a mahasiddha, the stories follow one of three general patterns: 1. high-ranking people abandoning (or using) their positions to follow a teacher, 2. a yogin training another monk, or 3. a low-caste laborer enduring the trials of samsara. There are some exceptions, but these are the three main types of protagonists.

Most of the illustrations depict the moments at which the individuals attained mahasiddha status, some of which are wildly and deliciously rebellious. Dombipa, for instance, was a beloved king who bought a young low-caste consort. When the people in his kingdom found out, albeit 12 years later, he abdicated his thrown and went to live with her in the forest. The kingdom suffered famine and they begged the king return. He declined and instead made a spectacle by riding, in “union” with his consort in his lap, on top of a tiger, with a snake as a whip, through the capital city. He was placed on a funeral pyre but did not burn, and instead, he departed for the heavenly realms intact.

Kanhapa, a monk, gained the ability to levitate, walk on water, and make parasols and drums fall from the sky. He turned himself into a wolf in order to eat human flesh thereby placating his teacher, but he was killed by a magic spell cast by a demon.

Medhina, a farmer, learned to “think of his thoughts as the plow, the two oxen as pleasure and pain, and his own body as the field, sowing the seeds of the elements that will bear fruit as the bliss of the nature of reality.” He proclaimed his realization from the tops of a tree.

Manibhadra, one of only a handful of women, was influenced by a mahasiddha to leave her husband and seek instruction and Cakrasamvara initiation in a charnel ground. When she returned she was beaten. She continued her practice even while raising three children and being abused. One day she broke a water pot and announced that she would never return to samsara again. She flew into the air, delivered teachings for a few weeks, and departed.

Story after story reveals different ways in which people from all walks of life reached an enlightened state, worked for the benefit of all sentient beings and ascended into higher realms. The message is that wisdom, and her many gifts, is available to all who seek it diligently.

Following a style that is very traditionally Tibetan, the artist behind this collection (who is unknown) expressed great technical mastery, imaginative freedom, and a creativity in his designs that differentiates his skills from other Tibetan artists of the time. His attention to details is evident in the patterns on the clothing, the architectural draftsmanship, and the symbolism of the various objects he included.

While providing a beautiful resource to Buddhist practitioners, there is also a bit of interest in this collection of paintings for the art historian. The paintings where never mounted, thereby leaving their borders exposed, on which one can see how the painter practiced with colors, lines and brush strokes.

There is also a labeling system on the borders which reveals the order in which the finished thangkas were to be hung and if they should occupy a position to the right or left of the central image of Vajradhara. Indications point to the interesting conclusion that the series was thought out in its entirety in advance.

Seeing the Sacred in Samsara is a wonder, a one-of-a-kind collection that fought the odds over tumultuous decades to come into being. Its very existence is a bit miraculous. It will serve as a timeless inspiration for all wisdom seekers for generations to come.