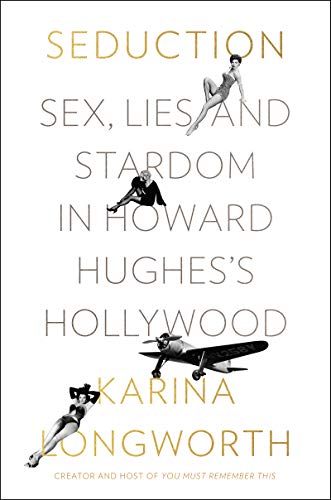 “Throughout his moviemaking career, Hughes relentlessly worked the Hollywood system to fuel his ego, his libido, and his ambition, but in the end, he was undone by his own paranoia. He died a reclusive outcast remembered almost as much for his oddities as he is for his accomplishments.”

Most people today think of Howard Hughes as the eccentric germophobe who made millions in the oil and aviation businesses (including wartime profiteering during World War II), while dabbling in the movie industry, but Hughes more than dabbled. He used his money and power as a producer, and later as owner of RKO Studios (which he essentially ran into the ground), to collect Hollywood starlets “so visually similar to one another that a rubber stamp would have offered more variation,” while simultaneously using that power, and sex, to make, control, and crush careers.

If Hughes were alive today, he might well be a poster boy for the #MeToo movement. Such is the decidedly unflattering portrait author Karina Longworth paints of Hughes in her new book Seduction: Sex, Lies, and Stardom in Howard Hughes’s Hollywood.

Longworth gives us a glimpse of Hollywood as it moved from its infancy to adolescence, from silent films to talkies, when multitudes of young women answered its siren call, hoping to find fame on the silver screen. For many, their only currency was their beauty and sexuality, which played right into the lustful hands of many of Hollywood’s power elite.

It was into this strange, and often perverse, industry that Howard Hughes, Jr. arrived in 1924 when, at the age of 18, he became heir to his father’s business as manufacturer of the Sharp-Hughes drill bit, with which the senior Hughes aspired to “drill the deepest well in the world.” But young Howard had different aspirations: to make a name for himself in aviation, movies, and golf . . . and to become the richest man in the world.

He quickly mastered Hollywood’s formula of promising young actresses a shot at fame in exchange for sexual favors. He also began “replicating the failure to make good on the promise, implied or directly stated at the beginning of the sexual transaction.” In fact, Hughes often took the formula one step further, promising marriage. That strategy would later cause considerable distress to his heirs and line the pockets of many a lawyer hired to untangle the legal mess wrought by his marriage-or-not to actress Terry Moore.

Seduction tells the story of some of the women who became involved with Hughes, either sexually or professionally. Some of them prospered because, or in spite, of Hughes, while others saw him dash their dreams before they could get airborne.  The names include luminaries like Jean Harlow, Katherine Hepburn, Ginger Rogers, Jane Russell, and Ava Gardner, and lesser knowns such as Billie Dove, Jean Peters, and Faith Domergue.

Hughes’s first major foray into moviemaking, which set a pattern for the rest of his Hollywood career, was with Hell’s Angels and his discovery of Jean Harlow. It also marked the birth of his fascination with using women’s breasts as a marketing tool. The author calls it his “interest and expertise in costuming for cleavage.”

That fascination created friction with his star, another pattern that would follow with future projects. Longworth tells us: “That Harlow took no pleasure in putting herself on display made the pleasure Hughes took in forcing her to do so all the more sadistic.” With Hell’s Angels, Hughes hit a trifecta of his personal interests: movies, aviation, and beautiful women. Had he been able to slip a Hughes drill bit into the film, it would have been a quadfecta.

Yet another pattern set by Hell’s Angels was the beginning of Hughes’s feuds with censors as he continually pushed the envelope of what was acceptable, often because he simply didn’t know what he was doing. The author tells us that his “lack of regard for the ‘rules’ of Hollywood had promotional value, but behind the scenes, his ignorance was at times almost embarrassing.”

By the time the 1940s rolled around, Hughes had mastered the game, and he turned his attention to a new generation of women. “As with so much in his career, Hughes did the same things that other men did—he just did them more crudely, and with even less of a regard for the person these actresses were before they came into his life, and what would become of them once he had moved on.”

Throughout his moviemaking career, Hughes relentlessly worked the Hollywood system to fuel his ego, his libido, and his ambition, but in the end, he was undone by his own paranoia. He died a reclusive outcast remembered almost as much for his oddities as he is for his accomplishments.

This is a book for Hollywood lovers, especially lovers of the golden age when the studio system cranked out movies like products on assembly lines. The moral of the story is that, when the rich and powerful die, they are just as dead as the poor and oppressed. The final exam is how they are remembered for living their lives when they were above-ground. To hear Karina Longworth tell it, Howard Hughes flunked.