Secrets Typed in Blood: A Pentecost and Parker Mystery 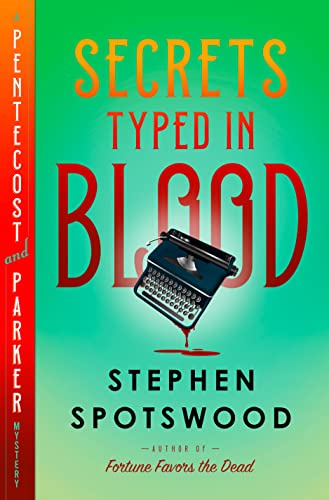 “Secrets Typed in Blood is a successful extension of a developing mystery series that definitely appears to be going places.”

When pulp mystery author Holly Quick realizes her stories are being used by someone to stage a series of murders, she takes her concerns to famed New York private detective Lillian Pentecost, who agrees to look into the matter.

Assisted by Willowjean Parker, her trusty aide, Pentecost subcontracts much of the legwork to an independent investigator, Darryl Klinghorn, while keeping Will Parker occupied with the ongoing search for series nemesis Olivia Waterhouse. But when Klinghorn becomes the killer’s next victim, Lt. Nathan Lazenby of the NYPD wants an explanation from Pentecost and Parker—and fast.

Secrets Typed in Blood is the third mystery in Spotswood’s very popular series, following Fortune Favors the Dead (2020) and Murder Under Her Skin (2021). Set in Brooklyn and the other boroughs of New York in the post-war 1940s, the novel does a good job capturing the atmosphere of the period, and Spotswood tells an excellent story. His plot keeps us interested throughout.

What must once again be borne in mind, however, is that he’s modeled his work very, very closely on the Nero Wolfe series by Rex Stout. So much so that readers may be forgiven if they lose track for a moment and think the story’s being told by Archie Goodwin in a black pencil skirt.

Lillian Pentecost, like Nero Wolfe, enjoys a reputation as New York’s top private investigator. While Wolfe is severely limited by his obesity and agoraphobia, Pentecost suffers from advancing multiple sclerosis that periodically compromises her mobility and effectiveness. Thankfully, though, when staring at the ceiling and following a train of thought, she doesn’t push her lips in and out.

Will Parker, meanwhile, shares Archie’s dry wit, his occasional ambivalence toward his employer, his verbatim reporting, his ability to withhold information from the authorities when necessary, and his severe dislike of having other detectives brought into their case. There’s not a great deal to tell them apart other than purses, heels, and makeup.

Meanwhile, Mrs. Campbell is an amusing stand-in for Wolfe’s chef, Fritz; Lt. Lazenby is a competent double for NYPD Inspector Cramer; and Pentecost’s office is set up like Wolfe’s, with side-by-side desks and a specific chair in which clients and key witnesses are seated.

There are a few deliberate differences introduced by Spotswood as an attempt to distance himself from his model. When she can, Pentecost is quite willing to leave their brownstone to visit clients and witnesses, for example. Unlike Wolfe, she’ll discuss business at the table. Then, of course, there’s the overt treatment of sex, which is intended to attract the LGBTQ audience.

The parallels are drawn a little too closely, however, when Parker finds a telephone in order to call the office and remarks, “I dialed the number I knew best.” A favorite line uttered by Archie Goodwin in many of Stout’s novels, it begs Wolfe fans to decide for themselves whether it and other “borrowings” venture a bit too far beyond the Pale.

Just the same, it must be stressed that Spotswood is an excellent writer. His prose is clean and uncluttered, he maintains a brisk pace, and the mystery keeps us guessing right through to the climax.

While the ending could have been shortened by a few chapters intended to tie up loose ends that didn’t really need the attention, Secrets Typed in Blood is a successful extension of a developing mystery series that definitely appears to be going places.