The Secret War in Afghanistan: The Soviet Union, China and Anglo-American Intelligence in the Afghan War (Library of Middle East History) 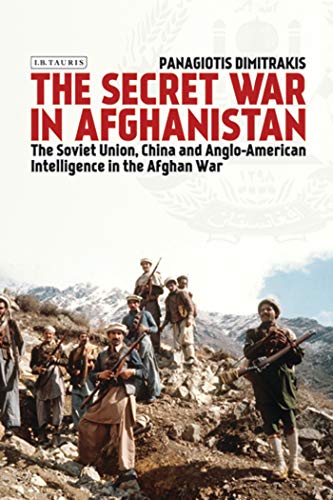 “. . . definitely a positive contribution and step in our ongoing attempt to understand this difficult and fascinating country.”

Books on the political and military use of Intelligence during conflicts often work on tenuous ground. This is because frequently, new reports of previously classified material are released revealing evidence conflicting with or contradicting previously held points of view or research.

On the other hand, and as demonstrated by recent evidence on Area 51 and the U-2 program as just an example, the reassessment of historical periods through use of new research also makes history a vibrant subject. This certainly applies to Dr. Dimitrakis' fine book, The Secret War in Afghanistan.

The work claims to be the "first detailed, archive-based account of Anglo-American secret intelligence and diplomacy during the invasion and occupation of Afghanistan" by the Soviet Union. Most interesting is the evidence Dr. Dimitrakis reveals about Anglo-American collaborations with China during this period and its impact on US relations with Pakistan.

The book, although totaling 288 pages, is not overdone and could have been much longer considering the intricacy of its subject matter. The topic of Pakistan and the intrigue created by its leader, Muhammed Zia ul-Haq and Pakistan's quest to obtain nuclear weapons and compete with India alone is a major and dense subject. Yet, The Secret War in Afghanistan is remarkably successful in covering a great amount of ground without tedium while also acknowledging and explaining nuances with strategic and historical importance.

Regarding the book's structure, the first two chapters provide readers with a detailed background of the roiling political events that led to the Soviet Invasion of Afghanistan. They are followed by a strong and informative chapter three entitled "International Reactions." This chapter digs into what clearly appears to be Dr. Dimitrakis' strength, analyzing Strategic Intelligence.

Early in the book readers are reminded of the importance Iran played by binding the United States' hands through the hostage crisis; however, and despite the concern of the USSR's invasion of Afghanistan, there was a greater concern about the Soviet's possible intention of invading Yugoslavia or even Pakistan to obtain access to the Indian Ocean.

Much of chapter three and chapter four is about determining the Soviet's intent on the part of the US and UK. Usefully, chapter four also covers political conflicts within the Kremlin regarding its role in Afghanistan.

With President Reagan's election and presidency beginning in January 1981, the Kremlin was in a difficult position. This is made clear by Reagan signing National Security Decision Directive 32. As Dr. Dimitrakis writes, "it considerably broadened the scope for covert action, as well as for pressing ahead with the arms race—the Soviet would be unable to cope with greater investment in arms, and their economy would collapse."

At this point, the remaining chapters (five, six, and seven) are gripping and break some new ground. This is particularly the case with Dr. Dimitrakis' research on Chinese efforts to support the Mujahadeen. The Chinese did this by encouraging Uyghur Muslims to deploy to Afghanistan through the Wakhan corridor, the narrow stretch of land that provides a border between the two countries.

Also notable is Dr. Dimitrakis' examination of the Sino-Soviet relationship during the period. This subject alone is incredibly complex as China had just fought with Vietnam in 1979, which the Soviets continued to support.

In geo-political terms, the Chinese strategic aim was counterbalancing India. This, in part, explained its attempts to ally itself with Pakistan. Similarly, supporting the Mujahadeen was a way to undermine the Soviet Union. Dr. Dimitrakis covers these subjects in an informative way that both specialists and general readers may find useful.

Overall, The Secret War in Afghanistan provides a notable English flavor to its perspective. This is mentioned because a great deal of primary materials stem from the British Foreign Commonwealth Office (FCO), although Dr. Dimitrakis does provide a balanced and readable account of this complex period.

The book, altogether, is very worthwhile, especially for Cold War scholars and students of Afghan history. General readers, however, would do well to begin with other works such as Steve Coll's Ghost Wars or George Crile's Charlie Wilson's War. The Secret War in Afghanistan is not overly scholarly and does include a nice balance of primary material research material with excellent secondary sources, such as Coll's book and Gregory Feifer's The Great Gamble.

After a careful reading of Dr. Dimitrakis' effort, it is fair to consider his work near the realm of the work of Christopher Andrew, one of the foremost scholars of Intelligence in the 20th century. The Secret War in Afghanistan is definitely a positive contribution and step in our ongoing attempt to understand this difficult and fascinating country.