The Secret Life of Whales 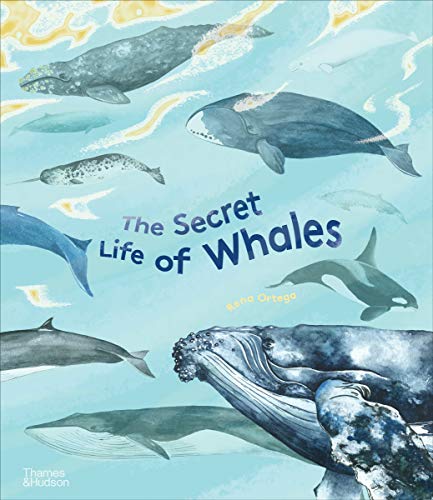 The Secret Life of Whales is a huge blue book with a shimmery cover. It starts off by explaining that whales belong to the Cetacean family and are either Baleen whales or toothed whales. Right away it’s clear that this book is for older readers than the normal picture book.

The next spread discusses whale evolution. Who knew that whales started out on land? That makes sense since they are mammals and birth their young live as opposed to hatching them from eggs. A timeline at the top of the pages covers 25 million years. “Their nose openings began to move toward the top of their heads, instead of being at the front, while their eyes moved to the sides of their heads.”

Back to baleen whales on the next page, the reader learns that this category includes the blue whale. “Like all baleen whales, it feeds on tiny shrimp-like animals called krill, which it filters by using its baleen plates like a sieve.” The opposite page discusses toothed whales, including the sperm whale. “The sperm whale only has teeth in its lower jaw. They are very large and heavy, weighing almost 2 lbs each.”

The oversized pages have a matte finish and have limited a color palette per page, ranging from black, tan, and white, to turquoise and black, to blue, black, and white on a bright pink background, or tans, browns, and yellows. A full-color palette is used sparingly on only three spreads, with shades of ocean colors as predominant.

A spread of salmon and blue tones shows a whale’s size as compared to other ocean animals: an octopus, agreat white shark, a manta ray, jellyfish, and giant squid.

The book is exploding with facts about whale behavior including breaching, fluking, and logging. The Blow gets its own spread, discussing differences between the blow of a gray whale, a humpback whale, and a sperm whale.

How Whales Sleep explains how they come up to take breaths, their brains only half asleep at a time. The Dive Sequence page is teal and green and very detailed.

How Whales Feed explains the difference between a baleen whale taking in tiny krill and an an orca as a hunter. Whale songs are explained as air moving in different cavities in their throats.

Family and Society discusses different dorsal fins in orcas, either male or female, motherhood, and how Beluga whales get paler as they age. The whale skeleton page has random factoids, like finger bones inside pectoral fins.

Beached whales show up on the Whales in Danger spread, discussing fishing nets and plastic. The book finishes off with the history of the whaling industry and whale watching.

This book is so loaded with facts that it will take several readings to absorb them all. It will be a great reference to anyone doing an animal report as a school assignment. Lovers of all things ocean will want this book in their bookcase, if it will fit. The cover is 143 square inches. Priced at $16.95, that’s a lot of bang for your buck.