The Secret Life of Emily Dickinson: A Novel 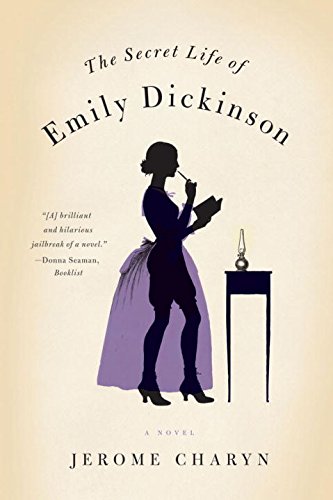 There exists a fascination with Emily Dickinson, a genius in a tiny bedroom scribbling poems that would become legendary. A mythological recluse writing about life, but not participating in it. Is it possible to tell a compelling story about an eccentric living in the recesses of her mind?

Jerome Charyn draws out different aspects of Dickinson’s personality by peopling her life with his created characters. The Secret Life of Emily Dickinson reads more like fiction than biography. While dutifully researched, the known facts about the “Belle of Amherst” are intermingled with the author’s interpretation regarding her poetic inspiration.

Charyn introduces Zilpah Marsh as Emily’s doppelganger. Zilpah is a scholarship student/maid at Mount Holyoke Female Seminary, while Emily is the well-to-do daughter of the “Earl of Amherst.” Zilpah has an affair with the school’s handyman while Emily is left pining for his love. Zilpah is the favored pupil of their literary schoolmistress, but it is Emily who achieves poetic greatness.

When Zilpah is hired as the Dickinson’s maid, she quickly forges a lasting bond with Emily’s father—something Emily struggles throughout her life to obtain. Yet it is Zilpah’s highly educated mind that prevents her from accepting her low station in life. Her inability to cope lands her in an insane asylum. Emily feels Zilpah’s mental breakdown—under similar circumstances, it could have been her own.

Despite the heated passion of her verse, Emily Dickinson is generally thought of as an old maid. Shattering this stereotype, Charyn fleshes out her relationships with the opposite sex. She receives Valentines and marriage proposals. She suffers a lifelong infatuation for Zilpah’s Holyoke handyman. She wants to run away with an alcoholic card shark. She sits on a judge’s lap. She seeks love in an underground rum establishment. She treasures a flea-infested blanket from a wanted criminal. She is able to write about romance not as a passive spectator but as an active participant. However, despite her adventures of the heart, she remains an unmarried virgin.

Charyn portrays Emily’s father as keeping her in a state of perpetual adolescence. He wants her to remain dependent on him, and he remains the most important man in Emily’s life. While in a dream-like state, she even imagines her father as the perfect suitor. It is unclear if their relationship revolves around an Electra complex or if Emily simply regards her self-worth by how she appears in his eyes.

She places samples of her work under his bedroom door, yet it takes years for him to respond. While constantly seeking his approval, she views her father as a type of savior. When wandering the streets of Boston, Dickinson stumbles across armed vigilantes pursuing Union deserters. In this chaos-induced scene, it is her father who magically comes to her rescue.

Emily suffers throughout her life with low self-esteem. Pale, freckled, and red-haired, her timid voice is barely audible. When her eyesight starts to fail, she wears dark-colored spectacles to shield her eyes from light. These glasses add to the oddity of her appearance, but stimulate her creative impulses. While wearing them she is instructed to refrain from writing, but that prohibition is quickly ignored.

Charyn shines when verbalizing Emily’s talent. She is a “kicking kangaroo” as the words come tumbling out. Her verses are “feathers” that require careful pruning. Inspiration is the “lightning” that illuminates her mind. While no doubt enhanced by her formal education, her poetry springs from a natural talent. To this day, it remains a stunning achievement in American literature.