The Secret History of Balls: The Stories Behind the Things We Love to Catch, Whack, Throw, Kick, Bounce and B at 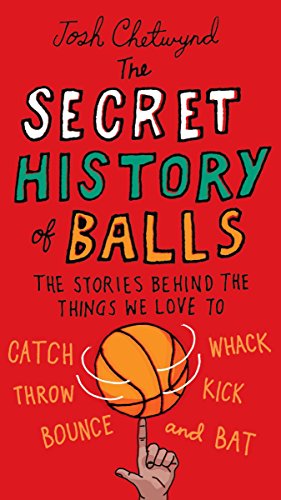 It’s okay to giggle like a schoolboy at the title—even the author acknowledges so in his introduction to The Secret History of Balls: The Stories Behind the Things We Love to Catch, Whack, Throw, Kick, Bounce, and Bat. Josh Chetwynd playfully lets us know what follows is in regards to “a thing which pretty much every human has played with at one time or another.”

What? It’s right there in the first paragraph! He then extends his “apologies to those who expected something a little saucier,” a knowing nod to the kid in all of us—and certainly indicative of the spirit of the book.

At some point most of us have participated in some kind of sport, and when you think about it the majority of them involve a sphere of some kind. What I would consider the big five (in no particular order)—football, baseball, basketball, soccer, and golf—all get their due here, as do a great number of others you’ve likely never heard of. Therein lies one of the strengths of the book, as well as a weakness.

Our inquisitive nature leads us to want to learn more about matters we care about, to gain insight into affairs in which we involve ourselves. Knowing that the Hindu god Vishnu had some alleged influence on the evolution of the golf ball, for instance, may give us a deeper appreciation for the game. Having an understanding of a ball’s construction may even provide some slight psychological advantage over your opponent.

Mr. Chetwynd offers plenty of historical background amidst the 60 orbs he presents, and that’s part of the fun. But credit must be given to him for adhering to the subject matter when it would have been incredibly easy to slip into aspects of any given game itself instead of sticking to the centerpiece of the game—the ball. Accordingly, some of the descriptions and backgrounds—especially those for more renowned spheroids—can leave the reader with the feeling that something was left out, that ties were perhaps left loose instead of neatly tied or intertwined.

But don’t think that The Secret History of Balls offers only page after page of stats and stale presentation. Mr. Chetwynd provides plenty of color and asides along the way. You can’t have a conversation about balls (*giggle*) without a run-in with an idiomatic expression or two, a good number of which are explained under the category of Ball Phrases, including such standards as:

Personally, I was slightly chagrined to see a couple others missing:

• In junior high, the very words that came out of my mouth the first time I saw the coach carrying a big net sack full of basketballs: “Man, that guy’s got some balls!” (true story!)
• Balls in a sling . . . I’d love to know to know where that came from.

On the whole the book doesn’t take itself too seriously. An excellent example bursts forth during the explanation of volleyball construction. I played volleyball for many years and never knew the bladder inside was not directly connected to the outer layer—this is referred to, as the author points out, “loose bladder construction—(insert your own joke here).”

It is also intriguing to learn just how prevalent the use of various animal parts was in early ball construction, pig bladders especially. Ever think a pig bladder could lead to death? It could if they needed to be manually inflated, like rugby balls did before the advent of mechanical inflation. How about fish eyes for the center of early baseballs?

Finally, no proper discussion of balls would be complete without mention of a game—and its ball—that you likely have never heard of: the game of Ulama Ball. Mr. Chetwynd floats the supposition that it might just be “sport’s sexiest sphere.” See page 191 for further details . . . ’cause you know you wanna.

The Secret History of Balls is ultimately a fun, if sometimes quirky, read; a worthy guide for ending testosterone or beer-fueled disputes—or perhaps starting one. Practically any ball you can think of gets some coverage here: pinballs to paintballs, marbles to meditation and medicine balls, jai alais to handballs—and a host of others ranging from Mesoamerica to modern day. Anyone with an interest in sports or game development and history will thoroughly enjoy bouncing through these offerings.