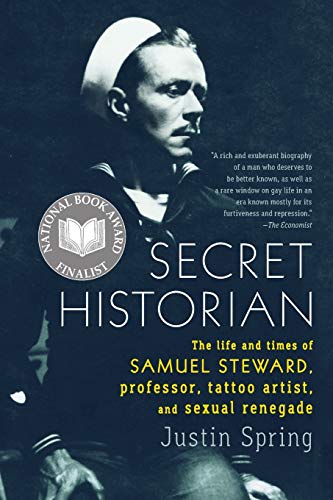 In these recessionary times, buying a book like Secret Historian only makes good sense for the frugal reader, in that it consists of a dizzying array of biographies, all bound within a single cover.

A heady mix, to be sure.

Steward, born in 1909 in a small town in southeastern Ohio, refused from a very early age to accept the rigid sexual and gender roles of the age. After the death of his mother when he was six and the disappearance of his father soon after, Steward was raised by maiden aunts who kept a boarding house, which would offer Steward his first glimpses into the world of desire, and it would be here, among the drifters who rented rooms, that he would have his early homosexual experiences. It would also set in place both a yearning for the human contact he lacked and an expectation of loneliness that proved ultimately prophetic.

As author Spring puts it, “He would grow to be a very sociable man, highly skilled at managing and seducing others, but unable to cope with everyday closeness.”

He also grew to be a man of exceptional intelligence and talent, whose skills as novelist, poet, and artist should have taken him far. Indeed, his early novel, Angels on the Bough, was published to enough acclaim to lead one to suspect that its publication marked the beginning of a brilliant career.

Oh, but those expecting that outcome—including Steward’s long-distance friend and mentor, Gertrude Stein—were in for a tasty surprise.

A man of both shadow and light, Steward from his early years lived two lives, one projected by his educated tone and his cultured appearance, the other created in secret by the expectations of the heterosexual society, something that Steward would ultimately rather wantonly reject and rebel against.

That he was without shame over his homosexual longings is remarkable, given the time and environment of his early years. That he had the wherewithal to actually keep an index card file of fifty-years’ worth of his sexual conquests—entitled “The Stud File,” with the backs of the cards often illustrated with drawings or Polaroid photographs of his conquests—a file that would one day act as an anchor in Alfred Kinsey’s study of male sexuality amazes, even today. Just having the organizational skills needed for such a task is impressive enough, to say nothing about having the material to make such a task worthwhile.

Author Spring’s colorful biography springs fully to life, thanks in large part to Steward’s own unpublished autobiography, which was found in the attic of an old Painted Lady Victorian in San Francisco, where Steward’s papers had been stored at the time of his death in 1993. The voice of the autobiography rings out through the pages of Secret Historian, giving it an authenticity it might have otherwise lacked.

Steward makes for a picaresque hero as the book travels with him, as his disguises, complete with new names, become new identities. As he moves with more and more bravado through a world in which he is ever more the outlaw, seducing the policemen, soldiers, and the sailors who were the particular objects of his lust.

A college professor, he takes up the art of tattooing, at first for the thrill he experienced when the needle pierced his skin, later for the sexual thrill of touching the skin of young military men who were the customers of the day.

Later, once he became a tattoo artist favored by the Hell’s Angel’s in Berkley, California, he morphs again, this time into Phil Andros, the author of gay-themed stories and novels, of which the best known is entitled $tud. Here, even his pen name is a pun, taken as it is from two greek words philos and andros, which, together, mean man-lover.

Secret Historian is a fascinating book, one that, in Looking for Mr. Goodbar fashion, illustrates the downward spiral from lusty youth to drug-addled loner. That Samuel Steward had the strength of character to live his life on his own sexual terms in a time when so many others cowered in corners is something to celebrate. That he ultimately became the saddest of gay stereotypes, the bitter old man without sexual appeal who lives with a dachshund in a grubby cottage, without friends or family, buying what sexual contact he can from street corner hustlers, undermines his early song of sexual liberation.

Secret Historian is expertly written, but not for the faint of heart. Like Steward’s own work, the story of his life at once fascinates and repels. In doing justice to his story, Justin Spring has written a book that keeps you turning pages, but, having read them makes you want to wash your hands.

Fifty years of stud files can be a lot to swallow.