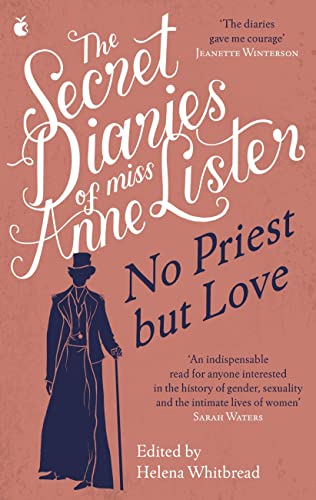 “Anne Lister is considered to be the first ‘modern’ lesbian.”

In 1984, Helena Whitbread was looking for a research project. She discovered the Lister journals at the Calderdale Archive. Discovering that the journals had recently been put on microfilm, she copied and took home the first 50 pages. So began a five-year journey of reading and transcribing the journals.

Helena Whitbread “liberated Anne Lister from the archives,” and in doing so established herself as the leading authority on Anne Lister’s coded entries with her first book, I Know My Own Heart, published in 1988.

Anne Lister was a 19th century landowner from Halifax in West Yorkshire. She began her journals on scraps of paper in 1816 when she was 25 years old and she continued to record her life until six weeks before her death, at 49, in 1840 in what is now Kutaisi, Georgia.

Until recently, few people knew anything about Anne Lister. Like most women, she was doomed to be relegated to the mists of history. Following the 2019 BBC/HBO production of Gentleman Jack, however, interest in Anne Lister’s life has erupted around the world. And, it is not only her life but the revelation that she kept a journal—26 volumes, to be exact— amounting to nearly five million words that has added an intensity to the response.

The challenge that Helena Whitbread undertook, and the basis for her books, involves the approximately 20% of the journal entries that are in Lister’s personal code, referred to as “crypt hand.”

While not the first person to read Lister’s journals, she was the first to transcribe and publish the entries written in Lister’s code. Before Whitbread’s books, there was a concerted effort to keep the coded entries from public view. Those entries were deemed too controversial. Helena Whitbread defied those who wanted to maintain the secret and published what many consider the most interesting parts of Lister’s journals.

The Secret Diaries of Miss Anne Lister: No Priest But Love covers the years of 1824 to 1826 when Anne Lister lived in Paris and began her affair with Mrs. Maria Barlow, an English widow. It is a smidgen of what can be found in the journals and serves as a catalyst for readers to explore more deeply into the life of Anne Lister. Whitbread’s insightful commentary, interspersed midst the journal fills what is happening in Paris, in the pension where Lister is living, and with the other people in Lister’s life.

For over 140 years, these coded passages were known to very few, all of whom maintained a level of unsurpassed secrecy because of what they contained. Even then, however, few people read them. Lister’s life, her existence, remained within the purview of academics and historians.

The sudden clamoring for everything Anne Lister prompted Helena Whitbread to update her book, No Priest But Love, originally published in 1992.

What the journals revealed so shocked Arthur Burrell that he encouraged his friend to burn the journals. Fortunately, John Lister refused and put the journals back behind the secret panels at Shibden where they remained until the Calderdale County Council took possession of Shibden Hall early 1930s. Since then the Lister journals have resided in the West Yorkshire Archive Service in Halifax.

Anne Lister, a woman who refused to be cowed by the restrictions of 19th century society, exercised her formidable intellect by studying languages, science, and medicine—all while managing her estate and travelling extensively. None of those activities were common for women.

She never married because, “I love and only love the fairer sex and thus beloved by them in turn. My heart revolts from any other lover than theirs.” The word “lesbian” did not exist in the 19th century. And, while men were hanged for engaging in same-sex relationships, women were not. It was not a crime for women to have sex with each other. Anne Lister is considered to be the first “modern” lesbian.

She writes in graphic detail about her sexual relationships with other women, “[T]he girls liked me and had always liked me. I had never been refused by anyone.”

Many who are familiar with Anne Lister and the 26 volumes that comprise her journals think of the crypt hand entries as “the good stuff.” Lister was explicit in her coded entries when describing her relationships because she was writing for herself and not a wider audience. It makes one wonder what Lister would say if she knew people were reading her journals now.

In 2011, the journals were added to the UNESCO Memory of the World Programme as a “pivotal document” in British history. Author Emma Donoghue has called Anne Lister’s journals “the Dead Sea Scrolls of lesbian history.”

In July 2019, the West Yorkshire Archives Services initiated the Anne Lister Transcription Project in which volunteers are transcribing the journals. The project will result in an official transcription of the Lister Journals.

Helena Whitbread’s commentary complements the journal entries and reflects her sensitivity to Anne Lister and her life. The book will whet the appetite of anyone interested in becoming enmeshed in the life of a woman who was wicked smart and went her own way at a time when women were, at best, considered an afterthought.

Lister wrote, “I am resolved not to let my life pass without some private memorial that I may hereafter read, perhaps with a smile.”

Some 180 years after her death, through Helena Whitbread’s efforts, Anne Lister’s journals are being read—often with a smile.