The Secret Archives of Sherlock Holmes 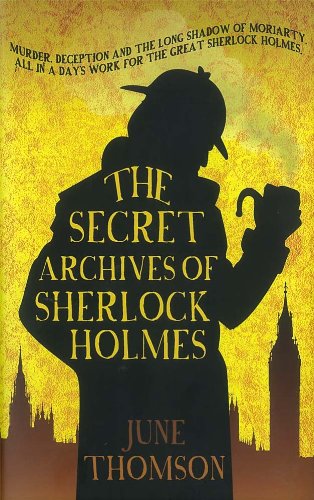 Arthur Conan Doyle attempted to kill Sherlock Holmes, but public outcry forced him to revive him, and the public still wants Sherlock. New attempts range from the brilliant PBS Masterpiece Mystery series that transplants Holmes to modern day to movies with Robert Downey as Sherlock-the-brawler. There was a great comic book series, an alternative Sherlock Holmes world where even in 20th century the values and class system of Victorian era England hold sway.

The device used here to authenticate that these Sherlock Holmes stories were indeed written by Dr. John F. Watson is clever. Apparently Watson left copies of manuscripts to an elderly spinster cousin. Through a tortured history, the provenance was lost, but the copies survived. They came into the possession of Aubrey Watson, and she has graciously decided to let a world eager for more Holmes to read them.

She may as well left the stories remain hidden. These stories are dull; neither the characters seeking Holmes’ help, nor the criminals he catches sparkle, there’s no page-turning intensity. Even the best stories here read very much like the dullest of modern headlines, with charlatans trying to separate old ladies from their money, and a pickpocket stealing from a church.

Saddest of all, the bromance is missing.

The chemistry between Holmes and Watson has to be apparent and based on mutual respect. Holmes may know everything, but Watson is a doctor. Holmes is cold and clinical, but he cares deeply for his friend, otherwise they are just roomies.

If you long for Sherlock Holmes, read the original. You may know the end, but the journey satisfies.